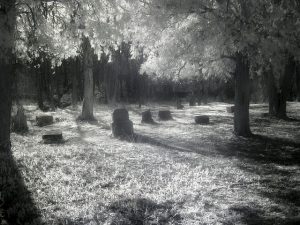 Every city has a few haunted graveyards, but few are as infamous as Bachelor’s Grove. The cemetery just to the southwest of Chicago is often touted as one of the world’s most haunted graveyards. It’s been long abandoned and nobody’s been buried there in almost 50 years, but it attracts visitors nonetheless. Those who dare enter Bachelor’s Grove must walk down a deserted path through the forest, over fallen trees and thorn bushes, only to come face-to-face with some of Chicago’s most frightening haunts. They may encounter strange and usual creatures like a two-headed lake monster, a phantom dog with red eyes, and seemingly intelligent orbs of light. The ghost of a woman carrying her infant baby is known to haunt the graveyard during the full moon, usually standing right at her tombstone. Even the roads around Bachelor’s Grove are haunted! Many say they’ve been chased down the street by phantom cars with no drivers, only for the car to disappear as it got close. But some of the haunts at Bachelor’s Grove are way too real. Like the occultists who once used the cemetery as a place to practice their demonic rituals, complete with animal sacrifices. Or the photo of the “Madonna of Bachelor’s Grove,” one of the most infamous photos of a ghost ever captured. Even though the graveyard is long abandoned, the spirits of those who rest here haven’t gone anywhere.

The land now occupied by Bachelor’s Grove was first settled in the 1820s by immigrants moving westward from the East Coast. The first residents of the Bremen Township were mainly composed of people of English, Irish, and Scottish descent, and hailed from New York, Connecticut, and Vermont. After the 1840s, most new settlers were of German descent.

As immigrant families arrived in the area, the plots around Bremen Township were divided up and handed out. The areas with more timber were the first to go, as they supplied construction materials. The various plots were named for the families who first acquired them. Walker’s Grove, Gooding’s Grove, Cooper’s Groves, and Blackstone’s Grove are all in the vicinity of Bachelor’s Grove.

There are several different theories for the naming of Bachelor’s Grove, as the plot had numerous alternate names and spellings over the years. The land was originally listed as Batchelder’s Grove, leading many to believe that it was settled by the Batchelder family, who lived in nearby Rich Township in 1845. Another theory says that it was named Bachelor’s Grove because it was first owned by four single men, who then named their plot after their respective lifestyle. The graveyard was originally named Everdon Cemetery, named after Corinthia Everdon, one of the first deedholders of the land.

The first bodies buried in Bachelor’s Grove were reportedly buried there in 1834, and were workers who died while digging the Illinois and Michigan Canal. The first official burials began in 1836 and ended sometime between the 1960s and 1980s. There are about 82 lots and 200 graves, though quite a few remain unused. There are also rumors that the land was used as a dumping ground for bodies by several Chicago-based crime families, including Al Capone’s posse. However, there isn’t any solid evidence to support this claim.

Bachelor’s Grove was largely abandoned in the late 1900s. The graveyard was allowed to become overgrown with vegetation and remains so today. Still, it attracts visitors who are willing to walk down a spooky path, filled with bushes and fallen trees. After its abandonment, Bachelor’s Grove was subject to vandalism, grave robbing, teenage drinking parties. Some even used Bachelor’s Grove for recreation, hosting picnics and using the pond as a fishing hole.

At the height of the vandalism during the 1970s, Bachelor’s Grove was purportedly used as a gathering place for satanic cults. Locals claim that occultists would routinely gather in the park and sacrifice animals in their rituals. The remains of mutilated animals were also found in the park by locals and police, along with evidence of occultist rituals.

As the vandalism and teenage debauchery reached a peak in the 1970s, many families who had ancestors buried there decided to have their bodies exhumed. They moved the bodies to cemeteries that were safer and closer to home.

The Haunts of Bachelor’s Grove

According to several paranormal experts and Chicago locals, Bachelor’s Grove is infamous for all sorts of strange occurrences. Some even say it’s among the most haunted cemeteries in the world. Most supernatural experiences in the graveyard consist of seeing floating orbs of blue light that seem to react to the observer. Some say it’s the forgotten spirits of those who were buried there, while others attribute the lights to swamp gas, a phenomenon called will-o-the-wisp. But the floating lights are the least of the spooky occurrences in Bachelor’s Grove.

Others tell the story of a phantom farmhouse seen floating in the cemetery. Those who have witnessed the phenomenon say it looks as if it exists on the other side of a portal. It never appears in the same part of the graveyard twice, but always retains its appearance as a quaint white house with a porch and a swing in the front yard. Many have attempted to get close to the farmhouse, but it always shrinks as the observer approaches, until it disappears altogether.

Several other strange sightings have been reported in Bachelor’s Grove and the surrounding vicinity. A woman dressed in all white has been spotted carrying her baby around the graveyard at night, usually during the full moon. Dark figures dressed in black hoods were also a common sight during the 1970s and 80s, though many say these were the shadows of the occultists who performed their rituals in the cemetery. The ghost of a vicious black dog with red eyes is known to chase visitors off the premises, usually seen as they approach the cemetery entrance. Phantom vehicles are known to randomly appear and vanish on the roads near Bachelor’s Grove. Strangely, there’s never anyone in the driver’s seat, and the cars often drive aggressively, aiming to injure any witnesses.

The Madonna of Bachelor’s Grove

Bachelor’s Grove is known to attract visitors looking to catch a ghostly photo, but in 1991, one of the most famous photos of a ghost ever captured was shot in the graveyard. Judy Huff Felz of the Ghost Research Society snapped a photo of a woman’s apparition sitting on a gravestone under the moonlight. The photo made headlines around the world, and she became known as the “Madonna of Bachelor’s Grove.”

Chicagoland is full of all sorts of terrors. I don’t know what attracts the ghosts here, but there sure are some seriously bloody horrors hiding in the Windy City. John Wayne Gacy was a serial killing clown who murdered over thirty people. He was said to be the most ruthless serial killer in America, having a knack for charming his way out of trouble while concealing the truth. In the end, he was caught after selling marijuana to a gas station cashier. The Demon Park Butcher ran a butcher shop in Palos Park, and thought he needed a new supply of meat when beef supplies were running low nationwide. He thought the hobos riding the train through the city would be perfect for the job. Eventually, he was found out, and the mob sent for him. The infamous H.H. Holmes landed in Chicago in 1886. After working his way up the economic ladder, he built his ornate hellhouse, which he used for his murders. The building was outfitted with all sorts of intricate mechanical traps that lured guests to certain areas of the house to be murdered. This included a basement full of vats of acid, soundproofed rooms, and living rooms that doubled as gas chambers. Want to see more Chicago haunts? Check out the top ten most haunted spots in Chi-town right here!