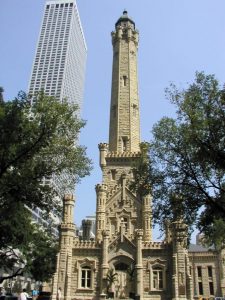 The Chicago Water Tower is one of the oldest buildings in the history of the city. In fact, it has witnessed its share of disaster over the years. One such event lead to the demise of one man inside this exact building. And it’s been said that his spirit still haunts the tower even today. Rumor has it, he’s not the only one around. We will be talking about the early years of the Chicago Water Tower and its intended uses and the stories behind why this building that has survived a fire (and perhaps its share of nature’s fury and abuse) is haunted possibly do this day. 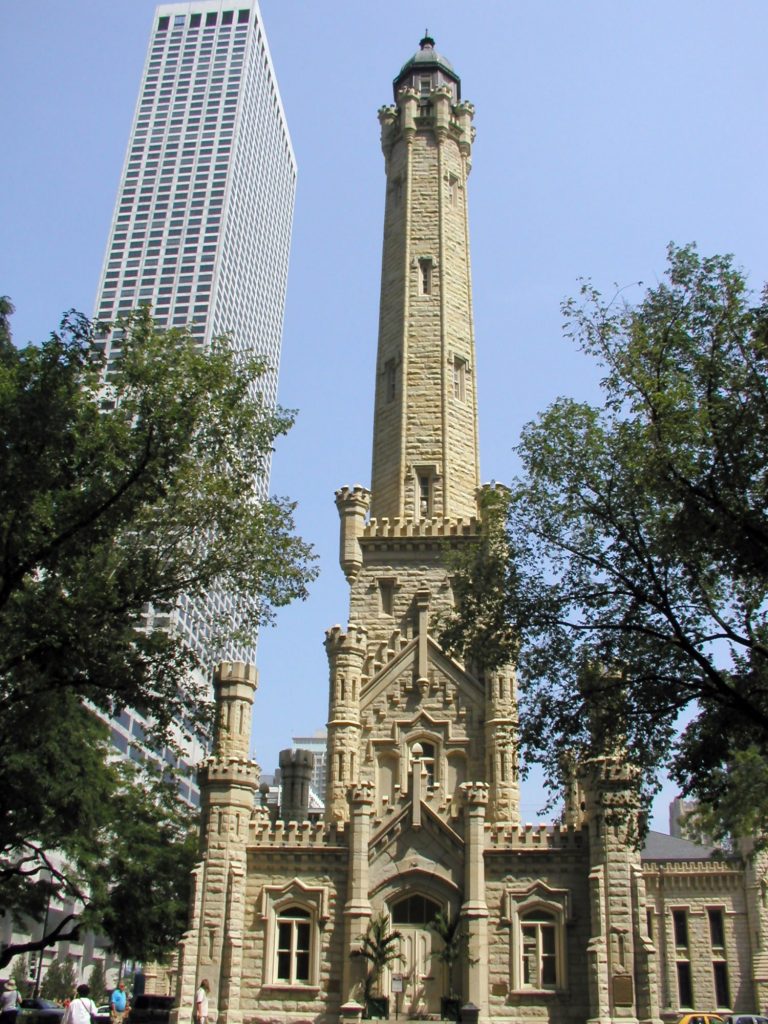 The Chicago Water Tower was built in 1869. As of today, it still stands as the second oldest water tower in America. Architect William Boynton had designed the tower and had it made from Lemont limestone. Once all was said and done, the tower stood a mere 182 feet tall. The tower contained a pipe that stood roughly around 140 feet high. The intent was to pump water from Lake Michigan so it could be used for multiple purposes. One such use was for the Chicago Fire Department. Its intent was to pump clean water via the water cribs from the lake.

However, despite the intent to provide the fire department with enough water to put out a fire, it wasn’t enough to contain the Great Fire of Chicago in 1871. After the flames burned much of the city, the water tower was only building that still stood in the burn area. While plans were made for rebuilding the city, the water tower became a prominent part of the city where planners believed building the city around it would be an ideal start to a new beginning.

Over the years, the tower represented the “old Chicago” and the history before the fire. Even though it was one of the very few buildings that withstood the fire, it was still one of the more prominent landmarks that represented strength and rebuilding. Since its initial construction, the tower had only been renovated twice, first beginning in 1913 and lasting up until 1916. The tower then underwent its second renovation project in 1978. Most of the renovation was focused on the interior of the tower, while minimal renovations were made to the outside.

In 1975, the water tower was named to the National Register of Historic Places. The building represented a symbol of a time when tragedy had struck, one such building remained standing through the chaos. However, there had been stories of the spirits that have haunted the water tower for many years. The question is: who are these spirits? What kind of message are they trying to send? And why are they inhabiting the tower of all places? 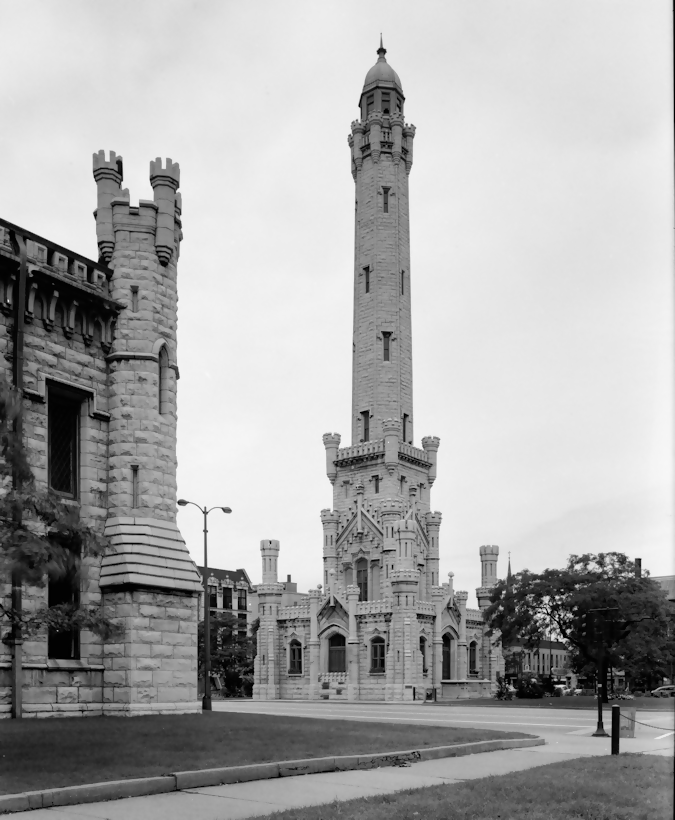 Stories of the hauntings of the Chicago Water Tower are quite frequent. Especially among the locals of the city. It is unclear when these hauntings have occurred, but one such story of why one spirit is something worth hearing. Among the number of specters that have somehow took up residence even after their untimely deaths, an unknown man who was operating the pumps during the Great Fire is someone who has stuck around long after the fire was finally extinguished. During the fire itself, the man was tirelessly pumping the water in hopes that the fire department would extinguish the flames. As the flames inched closer towards the tower, the man realized that the flames were almost impossible to contain. Soon after, he went up to the upper level of the tower where he would commit suicide by hanging.

Over the years, many residents passing through the tower would see the shadowy figure of a man in one of the top windows of the tower. It even got to a point where police had to be called to the tower to investigate. No body or no one for that matter was discovered. While the unknown man who desperately tried to fight the fire is one of the most famous deaths that occurred at the tower, this place was perhaps known for being a popular site for suicides over the years. The tower became the site of two known suicides in 1875 and 1881 respectively.

In 1875, a man named Frederick Kaiser had jumped to his death from the top of the tower after battling his adult lift with depression. Prior to his death, he was confined to a mental institution where he spent a few months. After his time there, he managed to maintain a job as a bookkeeper. Despite his father assuming that things were looking better for the young German man, Kaiser had suffered a major mental breakdown on the night of October 21st. Shortly after dinner, Kaiser managed to sneak into the tower where witnesses said that he sat near the top of the water tower before making his fatal plunge.

Six years later, another German man would soon take his own life in what seemed to be a similarly eerie situation. Hugo Von Malapert came from a rich family and was suffering from his own financial constraints. The story had quite a twist to it. Malapert had met with a fellow German named Victor Gangelin. The two had conversed outside of the water tower about their lives in America. Malapert lamented to Gangelin that he was not happy with his life in America and wanted to return to his home country. Gangelin begged to differ and tried to persuade his fellow countryman to stay and make life better and give it another chance. The talk had apparently failed as Malapert handed a card containing his employer’s address to Gangelin. He suggested to Gangelin that if he was looking for a job, he should check out the store where Malapert worked as a clerk. Malapert’s parting words to Gangelin were to ask for an application tomorrow since there was going to be a likely vacancy. Apparently, that likely vacancy was created as a result of Malapert’s suicide by way of jumping to his death.

Gangelin would later soon find the deceased Malapert on the ground with a note to his employer saying that his father would pay off the $200 debt that was owed. It was a bizarre turn of events where a job suggestion turned into a tragic end for one man. But to give Malapert credit, it seemed pretty clever of him to refer his countryman to a job that would soon be vacated by himself (even if he ultimately chose to return to Germany instead of killing himself).

The ghosts of both Germans may still be looming around along with the unknown man who bravely fought the fires to the point where it was no use. To this day, it’s unknown as to whether or not the spirits are still in the tower, but one would not be surprised to see something loom around and not so much cause trouble.

Today, the tower still stands and now serves as an office for the Chicago Office of Tourism. An art gallery is also placed inside the tower where artwork that represents the history of the city is on display. While it might be worth checking out, there may be no guarantee that you come across some specters who might have haunted the tower once before.

The Chicago Water Tower is representative of a time when in times of tragedy, something will stand tall and rise above the ashes. It had its well-deserved honor of having the city built around it soon after the fire. But the stories of the hauntings taking place are still told even today. And even if the Office of Tourism occupies the building, one has to wonder if some office workers are still trying to look for pens or office supplies that were somehow “misplaced”.