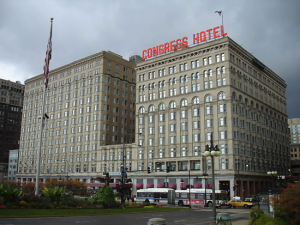 The Congress Plaza Hotel is one of the most prestigious hotels in the city of Chicago. Many guests have included heads of state, celebrities, and many other dignitaries from the world over. While it probably won’t be a cheap place to stay for most, it’s a hotel that has many stories of the people who have visited here in the past. But have they returned in spirit and somehow overstayed their welcomes? The Congress Plaza Hotel is a place of history and of grandeur. But it might be one of the most haunted hotels in the Windy City. We will talk about the history of this illustrious hotel and the stories that may connect the dots on why it might be haunted in the first place. 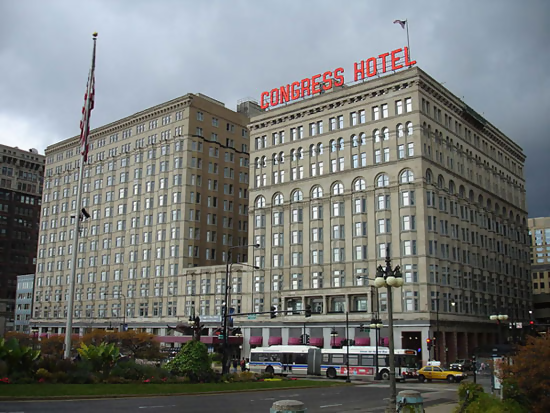 The hotel was designed by architect Clinton J. Warren and was opened for business in 1893. The building was said to be an extension to the Auditorium Theater which was located just across the street. Today, the hotel sits on South Michigan Avenue. The building was built to be eleven stories high and was considered to be one of the tallest buildings in Chicago prior to the construction of the Willis Tower. It didn’t take long before the hotel underwent two major renovations, both happening in the early 20th century. The room was renovated to accommodate more than 870 rooms and suites.

During its history, the hotel was the site of Benny Goodman’s radio show (for a short time as it was a temporary location) and became a training school for the United States Military around the time when World War II was already underway. The hotel was owned by the United States Government up until 1944. After changing back to civilian ownership, it was the site of many political events during the 1944 election. However, throughout much of the mid-20th century, the hotel underwent short periods of renovations. In the 1950s, the hotel added more suites and a restaurant located on the ground floor. It also saw more modernized changes with the addition of escalators and a ballroom.

Over the years, the Congress Plaza Hotel was the sight of many political events. These were included but not limited to Women’s Suffrage rallies, presidential rallies, and conventions. A total of eight United States Presidents have stayed at the Congress Plaza during their terms in office (with Franklin D. Roosevelt being the most recent). Over the years, other heads of state like British Prime Minister Winston Churchill have stayed here at the hotel.

With so many guests staying over the years, the stories of many hauntings have been told. Who are the spirits that have overstayed their welcome? Were there any events that were made for gruesome horror stories? Many people who have stayed or worked here have told stories of paranormal activity. 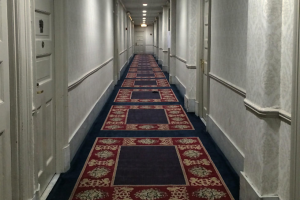 The Congress Plaza Hotel is known to this day as being one of the most haunted places in Chicago. And perhaps it should come as no surprise since with most hotels in the city there have been a number of deaths involving guests (while they were on site or nearby the hotel). There were numerous suicides and drug overdoses that have occurred over the years at the Congress Hotel. The spirits of those who were victims of the St. Valentine’s Day Massacre are said to wander the halls. While it wasn’t the actual sight of the gruesome attack on one of the most famous mobsters in America, it was where Jake “Greasy Thumb” Gusik would call Al Capone before and after the infamous attack while Capone himself was at his home in Florida.

It might be said that Capone himself (who had spent a considerable amount of time at the Congress Plaza Hotel) might be one of the specters looming around. Another ghost that some guests have sighted may have belonged to a boy who was six years old at the time of his death. His mother, a Polish immigrant, was suffering from severe depression and had managed to kill both her sons out the window before jumping to her death. One of the boys never made it to the city morgue. While the body of one of the two boys mysteriously disappeared, the spirit may still be playing tricks and causing trouble for all kinds of guests. Some have reported the sight of lights flickering and reporting misplaced items like hotel keys.

One story that was told over the years was the story of a hotel staffer that somehow suffocated to death. It was said that he was trapped inside one of the walls of the hotel and had suffocated while struggling to find a way out. This was known as the “Hand of Mystery” story. The Florentine guestroom is also a place where spirits seem to loom around. Most of the guests who have spent time in the room were said to have heard the whispers of a woman who was nowhere to be found.

One of the other ghosts was a transient named Peg Leg Johnny. Johnny’s spirit is said to be another one of the mischievous types that have been known for making noise at night. Security guards have recalled telling stories of the sounds of chairs being pushed around and doors being slammed with nobody in the available vicinity. While his death was untimely, Johnny is known for pulling pranks on unsuspecting guests and staff members.

However, there is one room in particular that has long been the thorn on the hotel staff’s side: Room 441. The room is known to house a spirit that belonged to a female. Guests have called the front desk to complain about a figure standing near the foot of the bed and jarring them awake with some “kicking” and “banging”. Some say that no one has ever committed suicide or even died in the exact room. It’s unclear as to where specifically the woman died or how she met her demise. But she is yet one of the many spirits that may seem to give the guests a bit of a headache each time they crash at the South Tower end of the hotel.

Is It Worth Visiting?

If you can shell out a good amount of money, you might end up staying here. Rest assured, the price per night won’t come cheap. So if you plan on visiting Chicago and have a good amount of money, you can crash here. Alternatively, you can bring a friend or two that are as adventurous as you. Or you don’t have to crash in order to come across some spooky paranormal activity. You may get to go on a haunted tour (where available) or explore areas that are open to the general public. While there really are no guarantees that you may see or hear a specter or encounter any paranormal activity, you’ll still have fun knowing that you are going on an adventure of a lifetime.

You can also find places near the Congress Plaza Hotel that might fit your budget. So if you must, find hotel rooms online (some with special deals going on, if available). Remember, there are a whole slew of haunted places in Chicago. Even if you don’t score a place near the Congress Plaza or don’t go there, it’s not a completely wasted trip.

The Congress Plaza Hotel is a place where mischief is always afoot in the spiritual world. But it might just be a place worth visiting for a ghost adventurer like yourself. Don’t be surprised if you end up hearing any recent stories of hauntings and other paranormal activities. You also might have an encounter that will leave you with a chilled and spooky feeling. Chicago is a huge place and there is no shortage of ghosts there (or in any other city).