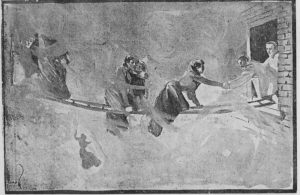 This alley is also known as Couch Place. It is used for pedestrians to pass through. You can find this in the middle of Chicago. You can also find the Oriental loading area in this alley as well. However, it wasn’t always this easy-going and simple. In 1903 some unimaginable actions took place here.

The Oriental Theatre was built in 1926, however, before that this area was just a simple piece of land that was home to the Iroquois Theatre. This theatre was built in the year 1903. This theatre was said to be the best and be very elegant. It was reported that it cost over a million dollars to build. Keep in mind in 1903 a million dollars is close to thirty million today. The newspapers advertised this theatre as being fireproof. However, with history, we now know that bragging about something being fireproof or a sink being unsinkable is not something we should do.

The theatre was showing Mr. Bluebeard which was a comedy musical from New York. It was about a man who had married a woman and murdered her. The man had proceeded to hide her body in a closet. The theatre had sold out for the show on December 3oth. All 1,724 seats were filled. Plus, there were a few hundred tickets that were sold for people to stand.

The Fire of the Iroquois

Midway through the showing of the play Mr. Bluebeard, a stage light had sparked. This spark flew onto the backdrops which were extremely flammable. The backdrops had been set on fire. The crew that was working backstage did everything they could to put out the flames, including using Kylfire. This was a fire extinguisher that was in powder form. However, this would not work because they could not throw it onto the flames. The flames were above them. At this point, the fire was spreading rapidly and the audience soon realized something was very wrong.

When the crowd panicked, Eddie Foy tried to calm the crowd down. He urged them to leave the building in an orderly fashion. Eddie Foy was a vaudeville actor and the star of the show. However, at this point, no one would listen to the star. People were rushing out of the seats. This did not do much good though because they could not easily find any exits. The exits of the theatre were not labeled. Plus, the doors had used what is known as a bascule lock. These locks are popular in theatres in Europe but not in Chicago. The people could not figure out how to unlock the doors to escape.

The stage crew had attempted to lower an asbestos fire curtain; however, it had become snagged on the lighting fixtures and could only lower halfway. The theatre had a skylight that was designed to be opened if there was a fire. This was to be opened to allow the flames and smoke to travel up and away from those watching the play. However, no matter how hard the stage crew tried, the skylight would not open. It seemed nailed shut. The cast had opened the back door to escape and at this time a huge gust of cold air was let in. This cold air fed the flames and sent a fireball into the crowd.

The theatre had an upper level. The people who were on this level seemed to have worse luck than those who were on the main floor. The people on the upper level had tried to get down to the main staircase. However, the main staircase that would lead to the lobby was locked. These doors were metal accordion doors. This was not unusual. People would be locked into their seats so they could not go to the lower level to have more expensive seats.

Several people continued to search for a fire escape and found them. However, the escapes had been frozen and would not lower them all the way down. It was at this time that people were starting to jump down to the brick alley below them. Many people died while jumping. However, the people who did survive survived because of the dead bodies cushioning their falls.

Some people were able to crawl across this alley to safety as well. Tenants who were living on the other side of the building had noticed the rush and panic and grabbed a few ladders and two-by-fours. They used these to help get people who were stuck on fire escapes, down. Some of the people made it out by crawling on these makeshift bridges, a few of them fell and died, other people had the makeshift bridge slip causing them to go into the alley below them. 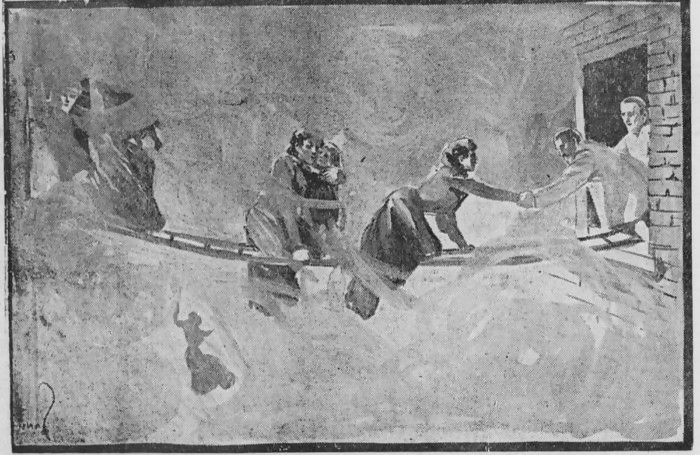 The fire had only lasted thirty minutes, however, 600 people lost their lives. The majority of the people were not in the building, the majority of them were outside the theatre in the alley. Some reports stated that the bodies were piled about six feet high. 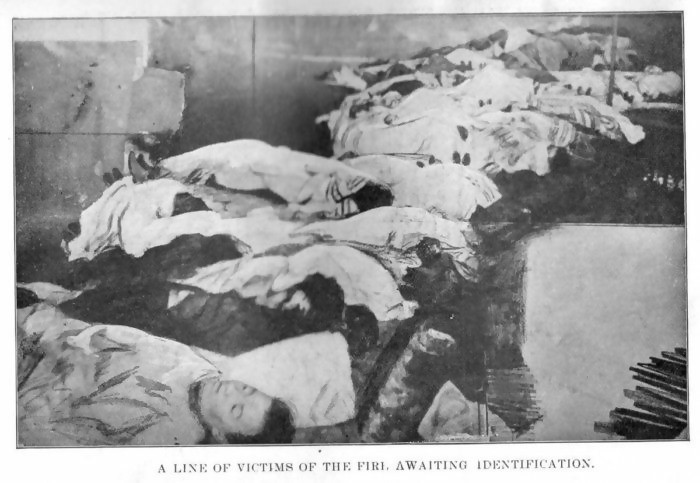 Soon after the fire, recovery work had begun. The people who were burned in the fire were piled in the alley. After they were done removing the bodies, they were taken to several mortuaries to be identified. Because of the flames and those jumping and falling to their deaths, the alley was soon named the Alley of Death. The sight of all the corpses in the alley after the fire helped seal the deal on the name of the alley. However, since that day there have been some paranormal and strange occurrences happening in that alleyway.

Since the fire, it is said that many spirits are lingering. If you walk in that alley you may notice a chilly breeze even on the warmest days. You may even hear someone whisper your name when you enter the alley. Some people report the feeling of hands on their shoulders. These hands are nowhere to be seen and no one is around when the person feeling them turns around. People refer to these hands as phantom hands.  However, this doesn’t stop people from visiting the alleyway and the theatre. Many people who are commuting in Chicago use this alleyway and so do actors, as well as the stage crews.

Death Alley is nothing to joke about. Six hundred people lost their lives from burning to death, falling to their death, or trying to save themselves. The alleyway in which they laid is where the haunting and strange occurrences happen. The place where the bodies laid is where there are said to be cold spots and other paranormal activity. This is all because of fire codes that were not yet discussed. After this fire, many different laws were put in place. All fire exits had to be labeled and all exits had to open outwards. Because of this fire, we have many of the laws we do today for fire emergencies. Today, the theatre is rebuilt and is now known as the Nederlander Theatre. Some people may also call it the Oriental Theatre as well.

A cold December night when people had just wanted to enjoy a play, they ended up dying. Not to mention, they had passed away in the worst ways possible. Falling to their death and burning alive. It is no wonder that the spirits are said to be lurking there today after all these years. After all the bodies were brought out and counted, the total death count was 602 people. Most of them were not even inside the building, most of them were laying on the ground in the dark alleyway. This is why the alley is known as Death Alley and the story lives on to this day.