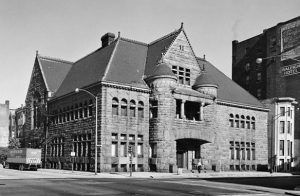 For over two decades, the Excalibur was one of Chicago’s biggest and most popular nightclubs, attracting patrons with its gothic architecture and late-night parties. But the Excalibur didn’t just attract partygoers; ghosts and spirits were also drawn to the dazzling discotheque. The building’s history is to blame, as it once housed the headquarters of the Chicago Historical Society. After the Great Chicago Fire, the Society needed a new headquarters, so they had one built in 1892. But the fire didn’t just destroy priceless artifacts; several people were also killed, believing their headquarters were fireproof. The spirits of those who perished stayed with the Historical Society, moving into the new gothic-style building. Long after the Chicago Historical Society moved out and became the Chicago History Museum, their medieval-esque building still stands on Dearborn Street. The ghosts and spirits still lie within, haunting anyone who dares to enter.

The Chicago Historical Society was established in 1856 to chronicle the city’s history. The Society operates a museum and interprets the various events, cultures, and phenomena that make up the history of Chicago.

The original headquarters of the CHS was burned down in the Great Chicago Fire of 1871. Several people thought the building was fireproof, so they ran inside, hoping to be sheltered from the flames. Unfortunately, the building was very much flammable, and dozens perished.

The Society also lost quite a few irreplaceable artifacts, like the original copy of Abraham Lincoln’s Emancipation Proclamation. After the fire, the Society regrouped and began collecting new materials, which were stored in a building owned by one of the Society’s more prominent members. In 1874, another fire destroyed their collection.

In 1892, CHS had its new headquarters built at 632 Dearborn Street. The building was designed by Chicago-based architect Henry Ives Cobb, known for his Romanesque architectural style and for designing dozens of buildings around the city. The new headquarters was clad in granite and had a gothic style, resembling a medieval castle.

In 1920, the CHS decided to open as a public museum, as they’ve been operating primarily as a research institution. They purchased the entirety of the historical collection owned by Charles F. Gunther, a prominent Chicago politician and collector.

The Society spent 36 years at the Dearborn Street Building before moving to Lincoln Park in 1932. The new building was built by a company backed by funding from the New Deal as part of a program that sought to expand space for public exhibitions. The new facility on North Clark Street was designed with the new goals of the Society in mind, which was to function as a public museum. The CHS still operates at its current location today, which is today known as the Chicago History Museum.

After the Historical Society

The Society vacated the building on 632 Dearborn in 1931. Afterward, it housed several different businesses and organizations. A magazine publisher, the Works Progress Administration (who built the Chicago History Museum), and the Loyal Order of the Moose all occupied the building over the next decade. The Chicago Institute of Design bought out the space in 1946 and left ten years later, after which several recording studios operated in the building during the 50s and 60s.

The building was listed on the National Register of Historic Places in 1978, being listed as the Old Chicago Historical Society Building. In 1997, the building was declared a Chicago Landmark.

In 1985, the building began its current tenure as a space for various nightclubs.

In 1985, Peter Gatien opened up his flagship nightclub, The Limelight, in Chicago, opting to open the club at the Old Chicago Historical Building. The Limelight was a chain of nightclubs with several locations, getting started in South Florida then expanding to Atlanta, Chicago, New York, and London. Like Chicago, the New York location operated out of a historic building, in an Episcopal Church. The Limelight in New York was temporarily shut down after the infamous murder involving Michael Alig and the Club Kids.

In 1989, Gatien sold the building to entrepreneur Fred Hoffman for $3.5 million. After spending another million on renovations, he opened two nightclubs in the building; Vision and Excalibur. Both clubs were known for extravagant parties, strict dress codes, and hosting live shows from big name artists. Popular performers at the clubs included Rhianna, Moby, and Tiesto. Club DJs usually played Hip-Hop and Electronic music.

The Excalibur was one of Chicago’s largest nightclubs, and at one point, was the largest entertainment venue in the city that wasn’t a hotel. It was easily among the most popular venues in Chicago, given its architecture and the fact that it took the location of the insanely popular The Limelight nightclub. Excalibur and Vision both closed their doors in 2012.

After Excalibur, several other nightclubs moved in and took its place. Castle Chicago opened up just a year later, its name a play on the building’s Gothic architecture. Castle Chicago contained three nightclubs, a restaurant, a cocktail bar, and rooms for private parties.

The building was bought out in 2014, and Castle Chicago closed shortly afterward. In 2018, an Asian restaurant and nightclub named Hybrid moved into the building and is still in operation today.

Since the opening of the Excalibur, patrons and staff of the nightclub have experienced several paranormal phenomena. It’s said that the long history of the building brings spirits, namely the souls who perished in the original Chicago Historical Society building during the Great Fire. It’s also said that the building was used as a morgue to house the bodies of those who died in the Eastland Disaster in 1915, when a ship capsized in the Chicago River, killing 844 people.

Some of the usual haunts around the Excalibur included the apparition of a woman in a white dress on the staircase. She was said to have a transparent blue aura and was often seen either going up or down the stairs. Some claimed to have been pushed by her spirit while descending the staircase. As of yet, nobody knows who the woman was while alive.

One rumor stated that the ghost of a lawyer who committed suicide haunts the building. This has proved to be untrue, as the building was never used as a residence. Instead, many believe the ghost is actually a man named Jean Lalime. Often touted to be “Chicago’s First Murder Victim,” Lalime was stabbed to death by rival trader John Kinzie. Lalime’s bones eventually found their way to the Historical Society, where they were publicly put on display. Even though the Chicago Historical Society now stores the bones at another location, it’s possible that the ghost of Lalime remained at the Excalibur.

The Dome Room occupied the third floor of the Excalibur and featured a large dome with a painting of Zeus looking down toward the ground. Interestingly, the Dome Room is said to be the most haunted room in the building. There are numerous accounts of drinks being pushed off the bar tables and onto the ground, and the staff have come in the morning to find glasses broken on the floor without the motion detector ever going off. Many have also experienced cold spots, candles lighting by themselves, and crying and moaning coming from empty bathrooms.

The spooky encounters at the Excalibur haven’t gone unnoticed. The building has made it on television several times over the years due to its purported hauntiness, having been featured on Ghost Adventures, A&E, and the Discovery Channel. It’s also featured in Ursula Bielski’s book Chicago Haunts. Chicago magician Niel Tobin also used the Excalibur as the set for his weekly show Supernatural Chicago. Tobin also used the Excalibur as a place for his annual seances, where he would attempt to contact the spirit of Harry Houdini.

Want to see more spooks in the Windy City? Say no more! US Ghost Adventures has got the most frightening haunts in Chicago! Take a stroll through Bachelor’s Grove Cemetery…if you can find the entrance! This long abandoned graveyard is shrouded in mystery and covered from the public eye by overgrown vegetation. Still, it’s been called one of the most haunted cemeteries in the world after a photographer caught a clear photo of a ghost sitting on a grave. Spend a night at the Drake Hotel! Early in the hotel’s history, a woman in a blood red dress took a dive from the top floor after catching her husband in bed with someone else. Her ghost still haunts the hotel to this day. Be careful walking through Death Alley! Spirits are known to whisper in the ears of passing pedestrians, and some have even felt a cold hand on their shoulder. Want to see more Chicago haunts? Check out the top ten most haunted spots in Chicago right here!