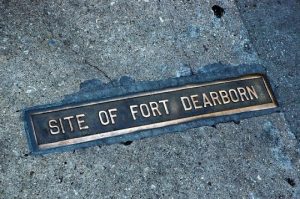 Fort Dearborn is one of the most historic sites in Chicago. Although not much is known about it prior to the European settlers’ arrival, it is a site that has endured much activity over the years. The site is now a historical Chicago Landmark and can be found in the Michigan-Whacker Historic District.

In its early years, the area of Fort Dearborn was passed from one country to the next. This was due to many different wars and squirmishes as countries vied for control of land in the New World. These fights also included the Native American Indians who were the original land dwellers.

On March 9, 1803, Henry Dearborn, the secretary of war, wrote a letter to Colonel Jean Hamtramck in March of 1803. Dearborn asked the Colonel to have an officer and a group of men study and survey the route from Detroit to Chicago. The Colonel tapped Captain John Whistler to serve as commandant and he set off with his men. The group completed the land survey by July of 1803. Then Whistler and his family set sail for Chicago and they landed on August 17 of the same year. The schooner was anchored about a half mile off shore, because a sandbar prohibited the vessel from entering the Chicago River.  It was noted that about 2000 Native American Indians were there to greet them.

By the summer of 1804, the troops had finished building the fort. The fort was it was constructed of log and enclosed in a double stockade and it had two blockhouses. It was named Fort Dearborn after the secretary of war.

When the War of 1812 began, General Hull ordered the occupants of Fort Dearborn to evacuate. Captain Heald was in charge of the evacuation, but on August 15, they were ambushed along the trail by about 500 Potawatomi Indians. The Indians managed to capture Heald and his wife, and they were ransomed off to the British. Out of 148 soldiers, women, and children who left the fort, 86 of them were killed in the ambush. The Potawatomi Indians burned Fort Dearborn to the ground just 24 hours later. 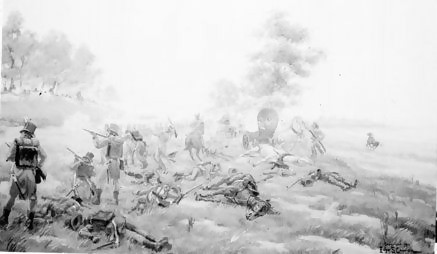 The second time around

After the War of 1812, Fort Dearborn was rebuilt. This time, the fort was constructed with a double wall of wooden palisades. There were barracks for officers and soldiers, as well as a garden and several other buildings. American troops briefly abandoned the fort during a peaceful time with the Indians. In 1828, troops took up residence in the fort again, when an outbreak of war with the Indians started up.

The second fort was described as being surrounded by high pickets. They had large gates which opened to the north and south. The second Fort Dearborn also included a parade ground. The fort was shut down before the Black Hawk War in 1832. In 1837, the fort began being used by the Superintendent of Harbor Works. The Fort and all of its land was then deeded to the city of Chicago by the Federal Government.

The Fort was later demolished in 1855 so that the south bank of the Chicago River could be dredged. This was done in order to straighten out the bend in the river, which effectively widened it by 150 feet.  Sadly, there was a fire in 1857 that destroyed almost all of the remaining buildings at the site. The Great Chicago Fire of 1871 would destroy the remaining blockhouses and the few other remaining buildings of the second Fort Dearborn.

How is it haunted?

The site of both Fort Dearborn’s has certainly seen its share of tragedy and struggle. But how does this make the site haunted? For many, many years the massacre site went unnoticed It was not until construction started in the 1980s that problems started to arise.

Workers doing construction found many human bones in the area of 16th Street and Indiana Avenue. They first assumed the bones to belong to victims of the cholera epidemic that took place in the 1840s. However, once the remains were studied and dated, people realized that the bones actually dated closer to the early 1800s. It was then that the bones were believed to be the remains of the massacre victims.

The remains of the massacre victims were reburied elsewhere. However, a few weeks later, people began to notice report ghost like figures of people who were wearing pioneer clothing and outdated military uniforms. These poor souls were found wandering around an empty lot that was just north of 16th Street. The ghosts were noted running about in terror and silently screaming. Bus drivers returning their buses to the garage at night were the ones who witnessed these figures the most.

The site of Fort Dearborn is considered to be the oldest haunting site in Chicago. The massacre of the Fort Dearborn evacuees was horrific. The men, women and children that were killed were slaughtered by tomahawks in hand to hand combat. Out of 148 victims, 12 of them were children. It is truly believed that these 148 massacre victims still wander the site of the Fort, looking for peace. If you are in Chicago, take a walk down Wells Avenue and in the area of Michigan Avenue and Whacker Drive. There are monuments in the streets and sidewalks honoring these poor lost souls. If you take a picture of the monuments, it is possible that you will also capture the image of some of these victims. 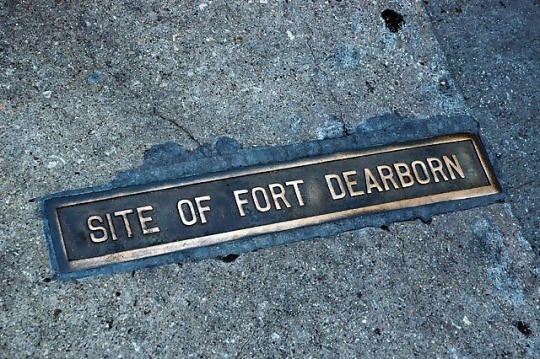 There is much to see and do in Chicago. It is certainly a thriving city. There are numerous shops and restaurants, as well as cultural attractions to see and experience. Visiting the Windy City is always a good idea. You can find plenty of things to keep you busy. It is also a great place to experience and learn American History.

Fort Dearborn was named after the Secretary of War at the time, Henry Dearborn. The location was chosen after scouting out and selecting an advantageous spot. The original inhabitants built the fort and barracks. Unfortunately, the Native American Indians did not appreciate their land being taken away.

When the War of 1812 began, the inhabitants were ordered to evacuate Fort Dearborn. Unfortunately, the Indians ambushed them as they were fleeing. A hand to hand combat ensued and 148 Americans died brutally at the end of Indian tomahawks. Twelve of the victims were children.

The fort was rebuilt and reinforced. It was eventually shut down. Then it was deeded over to the city of Chicago by the Federal Government. It was partially demolished in 1855. This allowed the city to dredge the south bank of the Chicago River. This enabled them to straighten out a bend and make it wider by about 150 feet. Eventually the rest of the fort would be destroyed in the Great Chicago Fire.

Once construction started in the 1980s, bones were discovered. After studying them and having them dated, scientists realized the bones were from people in the early 1800s. It is believed that these bones are the remains of the massacre victims. The remains were then placed in a final resting place.

Walk down the streets at night and chances are pretty good that you will encounter one of the poor lost souls of the massacre. They are known to wander the area wearing pioneer clothing and colonial military attire. There are several monuments in the streets and sidewalks for the victims, and chances are, if you take a picture of the monuments you might also catch a picture of one of the ghosts.

With plenty to see and do, no trip to Chicago would be complete without viewing the plaques on Wells Street and Michigan Ave and Whacker Drive honoring the massacre victims of the first Fort Dearborn.