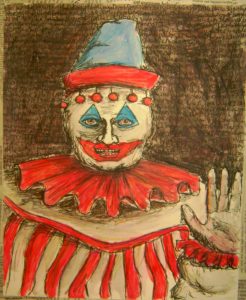 John Wayne Gacy was a friendly guy who got along well with kids, had a family, and volunteered in his community of Chicago, Illinois. So what made such a seemingly normal man don a clown costume to rape and murder 33 young men? What made Gacy the most notorious serial killer in United States history?

Gacy was born on March 17, 1942, to Danish and Polish parents. His father was horribly abusive to him, his siblings, and his mother. An alcoholic, his father was known to beat them with a razor strap if they misbehaved. He had a heart defect which his father also blamed him for since he couldn’t be as active as other children.

He was a manager in a fast food place before starting his own contracting business in the 1970s. He was married and divorced twice, and had two biological children and two stepdaughters.

Pogo the Clown–Alter Ego or Personality?

Gacy was part of the Jolly Jokers, a Chicago area clown club. He would host block parties and other events as Pogo or Patches the Clown. Later on in the trial, he would claim the clown was its own person and was responsible for the murders.

In 1968 Gacy was arrested for sexually assaulting two young boys. He was serving his time in the Iowa State Men’s Reformatory and underwent psychological evaluations. Despite the ten years he was supposed to be in jail, he got out in 1971 after 18 months.

He was to serve the rest of his time on probation. While he got remarried during this time, it seemed he had discovered his inner sadist.

Just a year later he was arrested again for assault, but the charges were dropped. This ability to wiggle out of trouble with the law allowed him to keep his killing streak going far longer than it should have gone.

Gacy referred to the 1970s as his “cruising years.” Until 1978 he seemed unstoppable. Police officers were being inundated with missing men cases from the surrounding countries and states, many with ties directly to Gacy. However, they could never get any of the young men to admit that Gacy was doing anything wrong (if they walked away from his house at all). There never seemed to be enough evidence to get a warrant to search the man’s house.

Between 1975-1978 there were a couple of cases where a young man went to the cops saying Gacy kidnapped him at gunpoint and forced him to do sexual acts. In one case the prosecutor just dropped the case. In another, he was only charged with a misdemeanor.

On December 11, 1978, Robert Piest was a 15-year-old who told his Mom he was going to talk to Gacy about a job he had been offered. The boy never returned from this meeting.

On December 19, 1978, Gacy invited 2 police officers to have breakfast in his home. In a cocky move, He tells them that his lawyer is putting together a $750,000 suit against the police for harassing him with illegal searches. The officers smell death in the house.

December 21, and Gacy is arrested for selling marijuana to a gas station cashier. Police were able to get a search warrant and raided Gacy’s ranch house in Norwood Park, Illinois.

He had told people for years there was a mold problem with the house to explain the stench. While he was being interviewed at the police station, he admitted to having killed and raped 27 (the real number ended up being 33) young boys and men.

He drew a diagram of where the bodies had been hidden. Most of them were in trenches under the crawlspace of his house. The house had to be dismantled for the bodies to be recovered. A forensic anthropologist and a dental expert are brought on to help with identifying the bodies. As one worker commented during the demolition: “If the Devil’s alive, he lived here.”

Gacy also admitted that he had begun dumping the bodies in the Des Moines River because he had no more room. Four were found in the river, including Robert Piest in April of 1979, the last to be discovered. It had taken 5 months to find all the bodies.

It took longer still for Gacy’s victims to be identified, and 7 are still only numbers to this day. Many could only be identified with x-rays or dental records, and the police believed many parents would not believe their son to be mixed up with Gacy or his homosexual actions.

The next day, county workers immediately razed the entire house to the ground.

The Trial of Gacy

Gacy’s infamous trial began on February 6, 1980. He had pleaded not guilty by reason of insanity. He claimed his Clown alter ego Pogo had done the deeds. The defense strategy was that if he could win an insanity plea, he could spend his sentence in a mental hospital instead of jail.

Psychologists testified for both the defense and the prosecution, and multiple stated he could plead insanity because he apparently had schizophrenia.

In the end, the jury reached a verdict of guilty for all 33 murders. He was served with 12 death sentences and 21 natural life sentences (a jail sentence of over 600 years).

The Legacy of the Killer Clown

The case labeled him the most ruthless serial killer in America.

He stayed at the Menard Correctional Facility for almost 15 years while taking his appeal cases all the way up to the Supreme Court. He tried to offer differing stories, but no court overturned his sentence. On May 10, 1994, he was killed by lethal injection.

After Gacy’s house was razed to the ground in 1979, it was almost immediately set up for redevelopment. Neighbors voiced the idea of having a memorial to his victims there instead, but the suggestion was ignored.

During the dismantling of Gacy’s house, it was common for huge crowds of people to watch the work on a daily basis. When a woman with her son was asked why she was there, she explained that she wanted him to know about the real evils in the world, and how close danger can get.

Sometimes the scariest things are not the monsters under the bed or the creatures in your closet; sometimes the worst monsters are the ones next door.

In a report from 2019, it was revealed that the new house on Gacy’s old property was now for sale. While the house had nothing to do with the case, it still sat in the same place his house was in.

It’s up for sale for 459K in Norwood Park, Illinois, and the best part is that state law allows realtors do not have to admit to crimes in a property’s past.

Sounds like the beginning of a horror movie, doesn’t it?

Want to check out the dark and spooky stories of Chicago? Come check out Windy City Ghosts for Ghost Tour Information here: