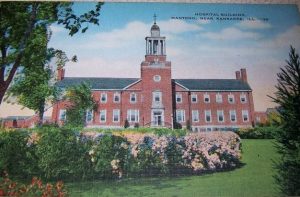 In 1930, Manteno State Mental Hospital opened its doors in response to overcrowding at other state asylums in the Chicago area. First praised for bringing jobs to Illinois during the Great Depression, the conditions in the asylum quickly plummeted as the population grew. Abuse and neglect became rampant as budget cuts and World War II took resources and staff away from Manteno Hospital. A typhoid fever epidemic also swept through the facility, killing dozens and leaving hundreds of others infected. Government doctors used the patients for horrifying experiments, including electroshock therapy, lobotomies, and injecting patients with malaria. Hundreds of patients died over the years due to the experiments, and their ghosts still walk the halls of Manteno State. The asylum was shut down sometime in the 1980s, but parts of the facility are still in use by Veteran’s Affairs. The areas of Manteno State that are abandoned are still haunted by the ghosts of the patients. Shadow people, disembodied voices, and the feeling of being watched by a strange presence are all common experiences in the decrepit halls of the old asylum.

The state legislature authorized Manteno State Hospital in 1927 in response to overcrowding at other state institutions, namely Kankakee and Chicago State. They chose a location close to Chicago, but far enough away where the land was still cheap. They landed on the town of Manteno, which had a central depot. The Interstate through the town had just been completed, making the tiny town an attractive location.

Construction on the hospital began in 1929, and the first hundred patients were transferred from Kankakee in 1930. Unlike other mental institutions, which were primarily contained in buildings, Manteno used a cottage structure. The facility was composed of several cottages, each of which was named for a prominent psychologist. The asylum implemented an on-site farm, which was meant to rehabilitate the patients using a form of work therapy.

Manteno remained a small asylum at first, with around a few hundred patients. Around the 1930s, the population started to grow. At first, this was viewed as a blessing. With many still reeling from the Great Depression, unemployed professionals from around Illinois found work in Manteno. But as the population grew, conditions deteriorated.

The national health budget was slashed in the mid-1930s, yet Manteno kept expanding. The hospital added a tuberculosis ward in 1937, bringing in hundreds more amidst waves of budget constraints and staff shortages. In 1939, typhoid fever swept through the hospital, killing 60 and infecting 400. Despite the epidemic, the population continued to grow, surpassing the 5,000 person capacity at the end of the decade.

When World War II broke out, things took a turn for the worst. Doctors and skilled staff workers were reallocated to aid in the war effort. The population swelled at the same time, worsening the already severe staff shortages. By the 1950s, Manteno State held over 8,000 patients, becoming the fourth largest mental asylum in the nation.

The combination of staff shortages and the wartime mentality meant that mental health institutions dropped to the bottom of national priorities. Abuse and neglect became the norm at most asylums, including Manteno.

Patients were often left to fend for themselves, and stories of patients attacking their caretakers were common. Escapes also became the norm, with nearly 200 patients fleeing the facility in 1941 alone. Reports of sexual abuse were also made public, enraging mental health advocates. But even the worse stories of neglect and abuse paled in comparison to the human experiments performed on the asylum’s unwitting patients.

Government doctors were sent to several asylums across the country, including Manteno. Their goal was to find ways to cure and control various mental illnesses. Electroshock therapy was the first of the experimental procedures brought to Manteno. Doctors began using it sometime in 1936, just as living conditions in the hospital were beginning to fall apart. Electroshock therapy consists of delivering strong jolts to the brain in an attempt to control mental illnesses. Generally speaking, the practice didn’t work. Patients were left traumatized, and sometimes even suffered brain damage, neurological damage, or heart problems.

During World War II, the experiments at Manteno began taking a more sinister turn. Patients were unknowingly injected with malaria in an attempt to find a remedy for the disease. Doctors tried all sorts of experimental medicines, leaving the patients to deal with the highly unusual side effects.

Manteno State also began lobotomizing patients in the 1940s. Lobotomies are an incredibly barbaric procedure where a hole is drilled into the front of the skull in an attempt to modify behavior. Whereas doctors believed they were curing mental illnesses like schizophrenia or bipolar disorder, in actuality, they were leaving the patients with severe brain damage. Most patients were rendered in a vegetative state after the procedure, unable to function. Those that retained motor control were left emotionally blunted, or in a blank state. Most who underwent lobotomies later died as a result of complications from their surgery.

The experiments at Manteno went on for decades, being revealed sometime in the 1950s. They were performed without the knowledge or consent of the patients, many of whom died as a result. Over 400 died in 1941 alone.

In the 1960s and 70s, most of the patients at Manteno consisted of the elderly, alcoholics who voluntarily committed, and homeless from the Chicago area who lacked any form of documentation. The hospital also took “mittimus” patients. These were people who were too insane to go to prison but too dangerous to be released back onto the streets. Some of these mittimus patients escaped, causing a stir in the nearby community. This led to the creation of a separate and secure area for the mittimus patients in 1977.

State officials made the decision to close Manteno State Hospital in 1983, with the doors officially closing in 1985. The northern half of the facility became a Veteran’s Affairs facility, which is still in use today. Much of the facility and grounds were renovated for use as an industrial park, golf course, and as a group home for at-risk youth.

Much of the facility was left abandoned. Teenagers, graffiti artists, and urban explorers all flock to the building for various reasons, some more dubious than others. What was left of the facility was bought out by private companies. The cottages are now being demolished due to safety concerns.

Thousands of souls passed through the halls of Manteno State Hospital in its 50 years of existence. The facility was crowded with people who were victimized and heavily stigmatized. The combination of potent psychiatric drugs, mental illness, abuse, and human experimentation left a dark aura over the facility. Thousands died from disease, brutal experiments, and sometimes outright murder. Many were buried in the cemetery, and their ghosts still haunt the premises.

Those who dare enter the Manteno State Hospital might come face to face with some seriously spooky spirits. Shadow people are commonly seen roaming around the building. Others have heard disembodied voices calling out to them. Some have even felt a cold hand pulling on their clothing. But most paranormal experiences aren’t material. Most people simply feel a strange presence follow them around the facility, patiently watching as they explore the old asylum.

The Windy City is home to some of America’s most terrifying haunts. Nobody knows why Chicago is so haunted, but the city is home to some of the nation’s most famous ghosts, serial killers, and graveyards. Resurrection Mary is one of Chicago’s infamous urban legends. The story is centered around a young woman named Mary who was struck by a car while walking home after a party. Ever since her death, Mary’s ghost has been seen hitchhiking on the side of the road, and those who give her a ride are surprised when she suddenly disappears upon reaching her destination. The Bachelor’s Grove Cemetery is often touted as the most haunted graveyard in the country. The brave souls who venture into the cemetery have reported strange visions, a two-headed lake monster, and phantom vehicles driving down nearby roads. H.H. Holmes was one of Chicago’s most creative serial killers. The man had a house full of intricate booby traps made to surprise and kill innocent victims. Living rooms doubling as gas chambers and a basement full of vats of acid were just a few of the surprises in Holmes’ arsenal. Want to see more Windy City haunts? Check out the top ten most haunted spots in the city right here!