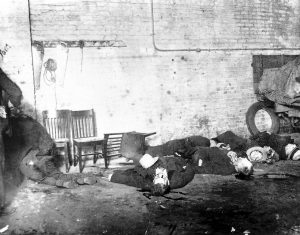 The site of the massacre seems like any other piece of land. You will walk past the 2100 block on North Clark Street. You will find a vacant lot between an apartment building and a retirement center. You will notice there are many trees over this lot and as you would suspect, cars. This seems like any other place in Lincoln Park, however, that is unless you know the history.

History Behind the Land

Roughly eighty years ago, this site is home to one of the bloodiest moments in Chicago’s history. The St. Valentine’s Day Massacre happened here. It was a very gruesome and bloody scene. It was not a scene for the faint of heart. At the time of the massacre, there was a warehouse in this location.

This massacre occurred in 1929 around 10:30 am on Valentine’s Day. This was the murder of associates and members of the North Side Gang. Seven members and associates were brutally murdered at this time. It is said that the men had worked for Al Capone. The members were rounded up at the Lincoln Park Garage on this fateful day. After the men were rounded up, they were forced to line up on the wall of the warehouse. They were then shot by some individuals who were dressed as police officers and businessmen. The seven men were killed with seventy rounds of ammo on that fateful day. 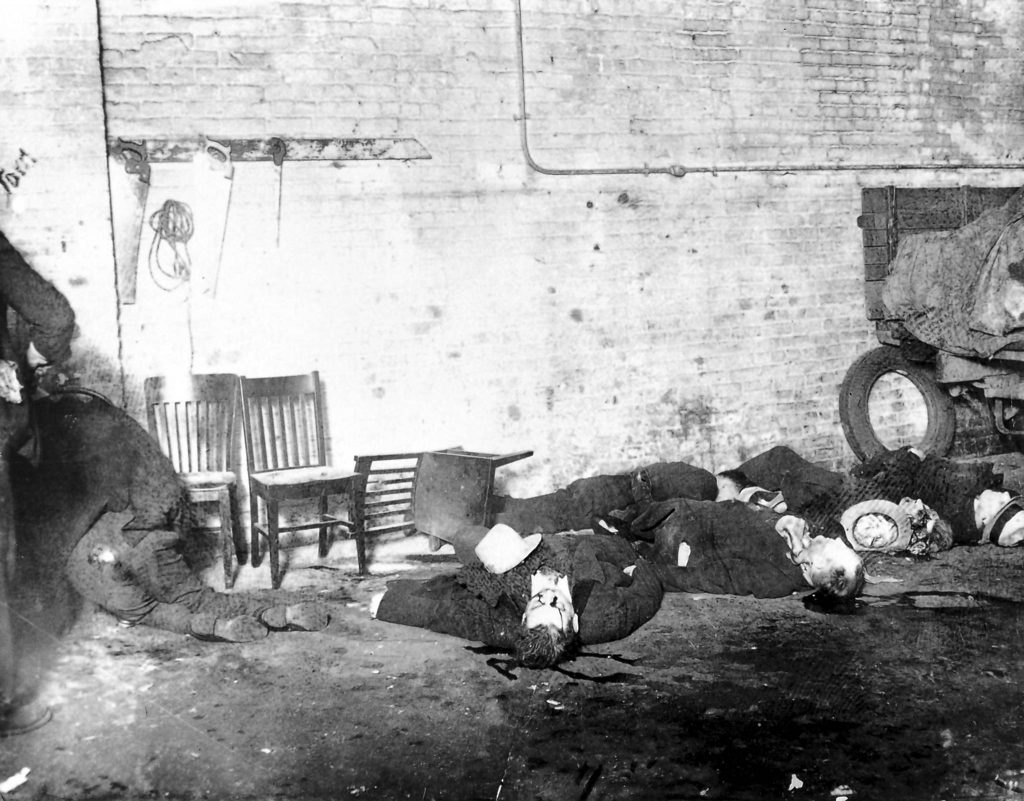 As history would tell us, the intended target of the shooting was the rival gang leader. This man was known as George Bugs Moran. Even though he was the intended target, he escaped without being unharmed. Bugs had actually arrived late for the meeting with his lieutenant. When they arrived, he had seen the phony police officers getting out of a parked car. Bugs decided to avoid being entangled in law enforcement so he went to a nearby coffee shop. They had missed the whole massacre and aftermath. It was said that one of the lookouts for Capone had mistaken one of the lieutenants for the leader himself. This was because he was wearing the same color hat and coat. It was said that the meeting was to lure George Bugs Moran by telling him there was a shipment of illegal booze for him. However, it was Capone’s men who were busted.

Twenty years after the brutal murder, in 1949, the front half of this garage was converted. It was now used for business. This was an antique furniture storage shop. The people who started this business did not know what had happened there because they were new to the area. The business was not very successful because only tourists had come to the shop because the people from the town knew the history.

A few years later, the building was torn down. This happened in 1967. However, the wall where the shooting occurred was integrated into the wall of the men’s restroom at a night club. Some of the bricks were smuggled by those who were tearing down the building.

Today, there is a fenced lawn that belongs to a nursing home. This was built where the garage had once been. There are also five trees planted on that same site. The large tree located in the middle of the yard is the marker to indicate where the brick wall had once stood.

Two of these killers were disguised as police while the other men had worn business suits. After the shootings, there were policemen who were holding those who shot the people at gunpoint. This is how they had made their getaway. This is why many people believed that the police had executed the men that day.

There were two men that had survived. One man was named Frank Gusenberg. He had died at the hospital after he had told police that no one had shot him. It was three hours after the police questioned him that he had passed away. Another man named Highball was not hurt. However, neither man would talk.

Even though no one was arrested for the murders, Capone did not get away completely. The police and public were alarmed by the increasing numbers of mob-related crimes that have been happening. In that year alone, 64 murders were related to mobs. It was that year that law enforcement was put under pressure to end this violence. Capone was labeled the largest threat and became a target. He was investigated in multiple federal investigations. It was these investigations that lead to his arrest. When Capone was arrested, he served most of his time in Alcatraz. He was released in 1939 and died eight years after his release.

Today, all of the bricks, except one hundred of them, that came from the garage wall where the men were murdered are on display. They are displayed at the Mob Museum in Vegas. The 100 missing bricks have been sold over the internet to many gangster buffs.

The location where the mass and brutal killings took place is said to be extremely haunted. It has been haunted for years. The bricks that were taken are said to bring people bad luck. It was also said that Capone had seen an entity and was haunted by this entity until he passed away.

The location where the killings took place is said to be haunted. People have reported unusual mists and lights. People can hear men’s voices when there is no one in sight or near the area. You can hear screaming from men and machine-guns firing when you are near this site. People who are sensitive and stand in front of the fence may notice a sense of real fear. Even if these people walk by the area, they may notice a real sense of panic and fear. Animals have also been reported to fear this area as well.

Other people say that the bricks were sold together in a box. It is said that the box was numbered and there was a diagram telling people how to reassemble the wall This was hooped that a single person would purchase this, however, it never sold.

It is said that Moran’s brother-in-law’s entity had started haunting Capone immediately after the killings. Capone had tried to send this entity to the other side by using a medium in the year 1931, however, it did not work. The entity is said to be James Clark, one of the men killed in the shooting. Even after Capone was released from prison, he was haunted by this entity until the day he had died.

It is said that the land that is there today is still haunted by the men who died that fateful day. Screaming and gunfire is a common occurrence at that site even when no one is around. If you walk by the fence of the nursing home you may even feel frightened. Some people even say that they see figures of gang members in the nursing home.