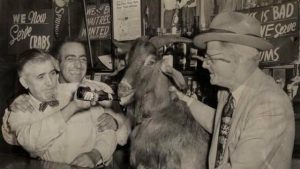 The Curse of the Billy Goat or Billy Goat curse is one of those offbeat tales that you sort of have to hear, from someone’s own lips, and then have it corroborated by a couple of third party officials to really believe. It’s just so weird and bizarre and so intricately laced into Chicago culture that it sounds made-up.

The Billy Goat curse is sport-related ju-ju that prevented the Chicago Cubs Major League Franchise to win a National League pennant for 71 years.

The precise nature of the curse differs from one telling to another. Accounts of the incident are varied and like a good tale get grandeur as the years ebb on. But, after a diligent investigation on my part, I can now state that the whole fandango got kicked off in 1945 with a telegram that read:

The telegram was dispatched to the team owner Phillip K. Wrigley and right off the bat – get it? – it ended up costing the Cubs. That year they were up two games to one in the World Series but ended up losing Game 4, as well as the best-of-seven series.

So vexing and powerful was the curse that the Cubs did not play in the World Series for the next 71 years until on the 46th anniversary of William Sianis’s death… and all because of a goat.

According to an account recorded on the Chicago Sun on October 7, 1945, the whammy began when Williams Sianis – a tavern owner – was given the bum’s rush at the stadium’s gate for wanting to see the gate with his pet goat. The man, who was incredibly infatuated with the goat – to the point that his tavern was called Billy Goat in honor of the animal – had no other choice but to leave his goat tied to a stake in the parking lot and go to the game all by his lonesome self.

A day later, Sianis tried to sue the Cubs’ organization and was laughed out off the courtroom. His revenge for such a slight… The now-famous Billy Goat curse.

They were one of Baseball’s greats… Then a damn goat upset the cosmos and everything went belly up.

Since then the Cubs have not only not won a pennant or World Series but a series of colorful and bizarre occurrences have plagued them.

Attempts to lift the curse

Before his death on October 22, 1970, William Sianis – heart fallen cause his curse had not only worked but had been so destructive – tried to lift the curse. Publicly he decried his actions and asked the Powers That Be to give the Cubs a break.

Sam Sianis, William’s nephew, has visited Wrigley Field with a goat a couple of times to break the curse… including on Opening Day in 1984 and again in 1989. His ministrations were in vain, the Cubs continued to tank.

On February 26, 2004, at the Harry Caray Restaurant in downtown Chicago, the Bartman baseball – an almost religious sports icon of bad luck – was shocked and electrocuted in pseudo pagan ritual with the intended purpose of lifting the malady. After the weird rain-dance, the only thing left of the baseball was a heap of strings.

On October 3, 2007, a butchered goat was hung from the Harry Caray statue.

“If the prankster intended to reverse the supposed billy goat curse with the stunt, it doesn’t appear to have worked.”

In 2008, a Greek Orthodox priest doused the Cubs’ dugout with Holy Water.

When the Pope visited Chicago, fans petitioned him for help and tried to bribe him with: “a lifetime supply of baseball park franks and season tickets.”

2011, on April’s fool no less, a social enterprise called Reverse The Curse, tired to put a stop on the curse by gifting goats to poor families in developing countries.

On April 10, 2013, a severed goat’s head was delivered – very Seven like – to the Cubs. A dullard’s attempt at getting rid of a curse first instituted on account of a jilted goat. It was addressed to the club’s owner Thomas S. Ricketts.

The End of The Curse.

After a 108-year drought, the Cubs beat the Cleveland Indians in the 2016 World Series in seven games after trailing in the series 3 games to 1.

They beat their opponents in game 7 by a score of 8–7.

For more weird tales, including Capone’s Ghost check out our blog.