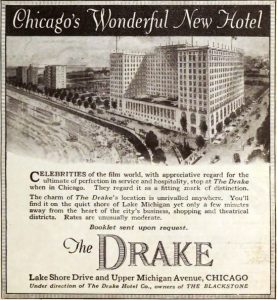 The Drake Hotel is a Hilton Hotel. It is located at 140 East Walton Plc in Chicago. It is well-known for being a full-service luxury hotel. You can find it downtown. It will be on the lakeside of Michigan Ave and a mere two blocks north of John Hancock Center. It overlooks Lake Michigan. The hotel was first founded in 1920. It had an Italian Renaissance style. It was founded by the firm of Cox and Marshall. It was quickly on the rise and became a landmark hotel in the windy city. The hotel has 74 suites and 535 rooms. It has a presidential suite that has six rooms in it. The hotel also features many restaurants, two ballrooms, and a secluded lobby. Plus, there is a club that is for members only. This club was introduced in the 40s. 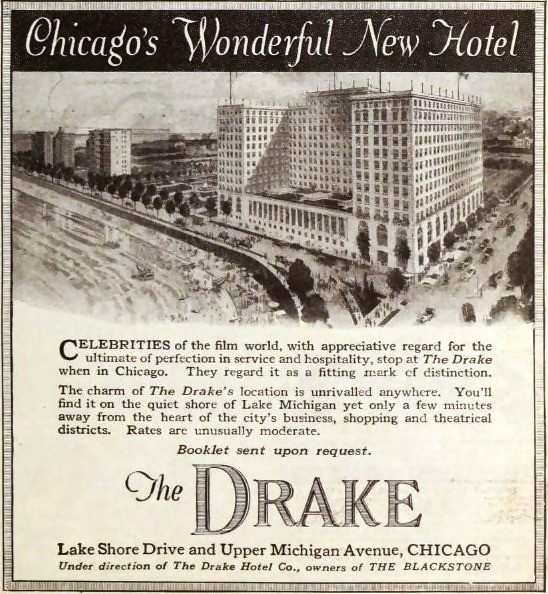 John Drake and Tracy Drake are second-generation hotel magnates. They had owned the property from 1872-1964. They had received this property from Potter Palmer’s estate in the year 1916. The building had been financed by a family friend’s syndicate. This included Palmer, Swift, Armor, and McCormick families, as well as the architects of the hotel. The architects included Charles Fox and Benjamin Marshall. The hotel cost about ten million dollars with all the construction, as well as furnishings. Today that would be the equivalent of 120 million dollars.

When the Drake had been built and was completed it gave the city a smooth transition. The transition was between the Gold Coast which was a residential area and the new commercial area known as Michigan Ave. The main entrance of the building would avoid the commotion of the commercial side and be designed to increase the access of vehicles. The brothers of the Drake hotel had maintained their family’s reputation. The main focus was commercial, political, and social life in the windy city. With the management and the owners, the hotel quickly became one of the most prominent hotels in Chicago.

The Drake hotel was an original studio of the WGN radio station before it was renamed in 1924 to WDAP. William Drake, along with his wife, had lived at this hotel for several years. However, the family lost the property during the Great Depression and had to leave.

In 1996 Hilton International bought the property. They decided to renovate the Drake Hotel and put aside 45 million dollars for this project. The project started in 1998 and lasted until 2003. In the few years after the renovation, a fitness center, new furnishings, and a conference center were added for an extra fifteen million dollars. It wasn’t until 2005 that the Hilton Hotels Corp had made the hotel part of their corporation.

As with anything, there are a lot of legends surrounding almost anything. Local legends state that John Drake, who was the father of the founder, stood outside with the owner of the hotel during the fire in 1871. It was said that the owner had seen the hotel being threatened by the large flames and offered to sell it for any price he could. Drake had noticed that the wind was changing directions and made an offer. This is how the hotel had become what it is today, the Drake Hotel. However, the fire took place in 1871 which was 49 years before the hotel was founded. The story is said to be confused with the purchase of the New Tremont House.

The Woman in Red is another story you may hear about. This is the oldest story in the hotel’s history. It dates back to the year 1920 on New Year’s Eve. At this time about two thousand of the most influential people in Chicago had gathered in the hotel’s gala. John Drake even attended this gathering. Even the man who designed the Iroquois Theatre was at this gathering. It is also said that a woman who attended the party had worn a dress so red it was called the blood-dress. The woman had gone back to her room to find her lover, possibly her husband, with another woman. The woman was very upset and decided to get into the elevator and take it to the tenth floor. Some people say she took it to the roof. It is at this point that she jumped from the tenth floor or the roof to her demise. The woman can be seen wandering in the Gold Room, the tenth floor and the Palm Court. She is most commonly seen on the tenth floor.

Another popular entity is the Woman in Black. This woman murdered Adele Born Williams in the year 1944. Adele was a guest at the Drake Hotel and was also a renowned socialite. She was the wife of a well-known state department attaché. She decided to head back to her room with her daughter. It was at this time that a middle-aged woman who had gray hair began shooting at them. The woman is said to have been wearing a Persian lamb coat. The coat was black. Many people saw this woman flee the scene; however, the case remains unsolved. To make this case even weirder, the weapon that was used to shoot Mrs. Williams was found a week later. It was found on a staircase that police had searched several times. Plus, the spare key that was reported missing to the room had been returned back to the front desk. No one knows how the key had gotten back to the front desk or how the gun had gotten on the staircase.

However, the most commonly known story is that of the parents of Bobby Franks. Bobby had been kidnapped and murdered. Bobby was beaten brutally until he died. At the time, Bobby was only fifteen years old. He was murdered and kidnapped by his own cousin. The name of the cousin was Richard Leob. He had an accomplice named Nathan Leopold. This happened in 1924. The two people had stated they did the crime for the thrill. They also wanted to see if they could get away with the crime. This case was the case of the century and there were many reports about it. This case made headlines. It is said that the Frank family had left their home so they would avoid being gawked at. The family had moved to the Drake Hotel. This is where they would spend the rest of their lives, including the afterlife. The father had died of a heart attack in the suite at the hotel in 1928. The mother had died in the hotel as well a mere nine years after her son’s death.  It is said that you can see the two wandering around the hotel. It seems as if they are mourning the loss of their son and grieving.

The Drake Hotel is an old hotel that has a lot of history. With this much history, it is not uncommon to hear of paranormal activities and stories. In fact, it would be uncommon not to hear them. There are three common entities that roam the hotels, however, none of them are said to be dangerous. These entities are lost souls who cannot pass on into the afterlife for some reason.

If you decide to stay at the Drake Hotel, be prepared to see the Lady in Red and the Woman in Black. You may also see the parents of a poor little boy who was brutally murdered for the fun of it. There is no need to be scared, just let them do what they need to do and move on. You may not believe these stories and that is why it is up to you to determine if the place is haunted or not.