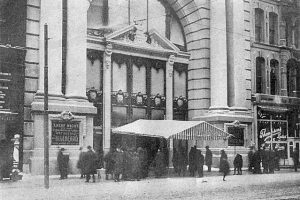 On the morning of December 30th, 1903, a blaze ignited within the Iroquois Theatre that would take the lives of over 600 people. Theatre patrons were burned alive, trampled to death, and trapped in the theatre’s maze-like layout as it burned to the ground. Firefighters came in to find bodies piled several feet high, all charred beyond recognition. Others died as they jumped to their deaths from the upper floors. The fire remains the deadliest single-building fire in American history and led to sweeping reforms in fire safety. But the spirits of the victims live on in the Nederlander Theatre. The alleyway next to the theatre, colloquially known as “Death Alley,” is host to all sorts of supernatural encounters. Pedestrians often report the feeling of being watched, hearing their names called by an unseen voice, and feeling a cold hand grab them while walking by.

The Iroquois Theatre was located in Chicago’s downtown Loop district, on West Randolph Street between State and Dearborn. The theatre was completed in November 1903 after facing several delays due to labor unrest and architectural disputes. The end result was a huge ornate building, with a capacity of over 1,600 people spread out amongst three levels. Critics applauded the design as “one of the most beautiful theatres in Chicago.”

The Iroquois Theatre gave more space to the stage actors than ordinary theatres of its day. The backstage area was huge, as were the dressing rooms, which were spread out over five levels. They also had an elevator to transport the actors to and from the stage floor. The fly gallery, which is the area that supports the scenery, was also much larger than in other theatres.

At the time of the theatre’s opening, Chicago’s Building Commissioner and Fire Inspector both declared that the building was “fireproof beyond all doubt.” Advertisements for upcoming shows at the Iroquois also announced the theatre was “absolutely fireproof.” This couldn’t be further from the truth.

The Iroquois Theatre’s layout was highly problematic in the case of an emergency. There was only one entrance, which according to the designers, was meant to make sure that all the patrons were seen upon entering, no matter the price of their ticket. Fire safety protocols required that all three levels of the theatre should have their own exit and staircase, but the only way to the upper levels was a single broad stairway. The design would later be one of the leading causes for the tragedy’s heavy loss of life.

It wasn’t just the layout of the theatre that proved dangerous. The Iroquois lacked several other fire safety features that were required of a building of this size. The editor of Fireproof Magazine took a tour of the theatre while it was being constructed and found several problems that would later contribute to the disaster. The theatre lacked a stage draft, which would have allowed the smoke to escape during the fire. The proscenium reinforcements were also exposed, and much of the trim was made of wood. The only fire suppressants in the building were six fire extinguishers. He also noted the lack of fire exits.

On the afternoon of December 30th, 1903, the Iroquois Theatre was packed with patrons waiting to see Mr. Bluebeard, a wacky comedy classic featuring Eddie Foy as the star. Since it was a matinee showing during the holiday season, the audience was composed mainly of women and children. Mothers and teachers brought their children along to see a classic show in a brand new theatre.

In the weeks leading up to the fire, the Iroquois was pulling in disappointingly small audiences. This had been the largest audience to date, even surpassing the theatre’s capacity. Whereas the theatre had 1,600 seats, over 2,000 patrons attended. Many were crowded into the standing rooms, while hundreds of others spilled over into the entrance and isles.

At 3:15 pm, as the show was beginning its second act, a broken arc lamp created a spark that ignited one of the stage curtains. The stagehands attempted to use the fire extinguishers to put out the fire, but the flames were too high up on stage,  and the fire retardant came raining back down.

The crowd began to panic, and Eddie Foy, dressed in drag for his next scene, came out and attempted to calm the audience. As flaming debris rained down around him, he pleaded with the audience to not panic, as there was “no danger here.” Eddie survived and was lauded as a hero for his attempt to calm the theatergoers.

While Eddie made it, most weren’t so lucky. The single exit meant that people piled into the main staircase, where they encountered three stories worth of theatre patrons, all attempting to escape simultaneously. People trampled one another as flaming debris fell down around them. The crowd roared as they pushed and shoved their way to the main entrance.

Others scoured the theatre looking for other exits, of which there were very few. The theatre had other doors for bringing in props to the fly gallery, but they were small and obscured by curtains. Additional exits were locked or were false doors, trapping dozens of patrons in dead ends, where they later met their demise by asphyxiation or smoke inhalation. The cast members opened the rear stage door to escape the blaze, but the blast of icy air fueled the fire, creating a massive fireball that instantly killed dozens high up in the balcony.

Those who escaped the fireball had nowhere to go, as the theatre was fitted with iron gates to prevent them from sneaking into the more expensive lower floors. Some found their way to the unfinished fire exits. With no way to get down, they began jumping off. The first people to jump mostly died on landing. Their bodies provided a cushion for the next group to safely land on the ground floor.

The Iroquois had no fire alarm. The authorities were alerted when a police officer saw the crowd emerge in a panic. A stagehand was also able to escape and ran to the nearest firehouse to get help. Chicago Fire Engine 13 was the first on the scene, but the heavy smoke prevented the use of the aerial ladders. Eventually, the blaze was controlled, and the severity of the disaster became apparent.

The Iroquois Theatre had burned down in the span of 15 minutes, just 5 weeks after the grand opening. It was clear in the aftermath that hundreds were dead. Bodies lie in piles six feet deep. Heaps of corpses were found in the theatre’s many dead-end hallways, charred beyond recognition. Many were found alive, insulated from the smoke and flames by the dozens of bodies piled above them.

In the end, over 600 people were killed in the fire. About 500 died in the theatre, while another hundred later succumbed to injuries. Hundreds more survived, but not without long-lasting complications.

The Iroquois Theatre fire remains the deadliest single-building fire in US history and led to a sweeping set of fire safety reforms nationwide.

After the fire, the facade of the Iroquois Theatre was demolished to make way for the Oriental Theatre. The Oriental was then replaced by the Nederlander, which still stands to this day.

The haunted aura of the Iroquois Theatre still lives on to this day. The Nederlander Theatre is known to harbor the ghosts of those who died on that tragic winter afternoon. Most people seem to have paranormal experiences in the alley just adjacent to the theatre. It’s called Couch Place and serves as a loading dock for the theatre as well as a shortcut for pedestrians. Locals know the area as “Death Alley,” and passersby have been subject to all sorts of strange occurrences.

Many claim to have felt a strange presence follow them down the alley, while others have had heard strange voices whisper into their ear, seemingly as if someone was standing right behind them. Some people claim to hear their names being called from far away. There are also tactile experiences as well, as some have felt a cold hand land on their shoulder, only to turn around and see nobody there.

A cold breeze blows through the Windy City…probably because it’s so haunted! The haunts in Chicago are some of the most terrifying in the country. Like the spooky Bachelor’s Grove Cemetery, one of America’s most haunted graveyards. Though it’s been long abandoned, those who visit Bachelor’s Grove have encountered a two-headed monster, an evil ghost dog, and satanic cults. There’s also the story of H.H. Holmes, who built a massive house complete with death traps to aid in his serial murdering fantasies. His mansion was equipped with booby traps, gas chambers, and vats of acid. Al Capone was also known to lead the corpses of his victims strewn across Chicago, and Capone’s posse is probably responsible for more haunted hotspots in the city than anybody else. Want to see more Chi-town haunts? Check out the top ten haunted hotspots in Chicago right here!