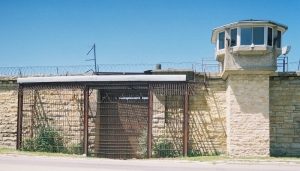 The Old Joliet Prison just outside of Chicago was the site of hundreds of executions and held notorious criminals like John Wayne Gacy and Baby Face Nelson. The imposingly dark appearance of the prison casts a shadow on the surrounding area, given its sprawling perimeter and neo-gothic architecture. Joliet was known for its unsanitary and unsafe conditions, with government officials calling for its shutdown for most of the facility’s existence. Meanwhile, Joliet Prison became a symbol for Chicago’s criminality, being featured in numerous movies, TV shows, songs, and even a poem or two. Today, the abandoned facility serves as a museum, with historical and haunted tours being offered around the old prison. Thinking about making a visit to Joliet Prison? Well…be ready for some seriously spooky haunts!

Joliet Prison was originally known as Illinois State Penitentiary. The facility opened in 1858, just a few years after Joliet was founded. The spooky gothic architecture of the building can be attributed to W.W. Boyington, who also designed the Chicago Water Tower.

Joliet Prison was meant to relieve overcrowding at the nearby Alton State Penitentiary. Prisoners were used as laborers to build Joliet, and once completed, the process of transferring prisoners began. The last of the inmates from Alton State arrived in Joliet in 1860. The prison was still in use during the Civil War when it housed both criminals and Confederate prisoners of war.

In the beginning, Joliet was revered as a model prison, but that quickly changed as the population of the prison swelled beyond capacity. By the late 1870s, over 2,000 inmates packed the cellblocks, and the living conditions were unsanitary at best. There were several calls to close the prison in the early 1900s. Statesville Penitentiary was constructed in the 1920s as a replacement, but Joliet continued to operate even after Statesville was built.

Some of Chicago’s more infamous criminals were housed at Joliet Prison. In the 1920s, Nathan Leopold and Richard Loeb were sentenced to life in Joliet Prison after the murder of 14 year old Robert Franks. Leopold and Loeb were two wealthy students from the University of Chicago, and had believed they committed “the perfect crime.” According to police and relatives, the two had delusions of grandeur, spurred by Neistche’s concept of the Ubermensch. In other words, their perceived superiority compared to others allowed them to break the law, and act as they pleased, without any regard for the consequences.

Leopold and Loeb murdered Franks after kidnapping him on his way home. They took precarious steps to cover their tracks and created an elaborate plan to collect a ransom from Franks’ family. After the case gained widespread media coverage, they abandoned the ransom plan. Eventually, the clues they left behind led police straight back to them, and they were arrested and put on trial. Both were originally sentenced to the death penalty, though they were saved by their defense attorney, who argue for life sentences.

At first, the pair did their time at Joliet Prison. Authorities tried to keep them apart, but they maintained their friendship. They were later transferred to Statesville, where Loeb was murdered by a fellow inmate. Leopold completed the rest of his time at Statesville and contributed to the improvement of the overall quality of life inside the prison. He organized the prison library, taught classes, and submitted himself for experimental treatments. Nathan Leopold was released from prison in 1958.

Depression-era gangster and bank robber Baby Face Nelson was also incarcerated in Joliet Prison for a short time. Born Lester Joseph Gillis, he became known as Baby Face due to his youthful appearance and dashingly good looks. Ironically, nobody had the guts to call him that to his face. Baby Face was arrested in the winter of 1931, along with the rest of his gang, known as the “Tape Bandits.” They were known for tying up their victims with tape and clearing out their homes of jewelry, money, and anything else of value. They targeted wealthy people of influence, first gaining fame for the home invasion of a prominent magazine editor. They even robbed the wife of Chicago mayor Big Bill Thompson.

Baby Face was sentenced to 1 year to life in prison, first doing time at Joliet. This time was short-lived, however, as the elusive bank robber escaped during a transfer. He went back to his seedy ways, making friends with other well-known gangsters like John Dillinger and Pretty Boy Floyd. His run came to an end in 1934, when he was killed in a shootout with federal agents.

Other high-profile criminals believed to have spent time in Joliet Prison include John Wayne Gacy, also known as the Clown Killer, and serial murderer Robert Speck.

In 1975, the Black P. Stones, an organized crime group from Chicago, took over a cellblock in Joliet Prison. They held several correctional officers hostage and demanded that they not be separated and transferred to other prisons. The organization had gained too much power within Joliet, and authorities were conspiring to break them up by sending the more prominent members to other prisons.

Fred L. Finkbeiner, the prison warden at the time, spoke to the inmates through the intercom system. He attempted to deescalate the situation and assured the prisoners that they wouldn’t be hurt. He sent former Black P. Stone member Herbert “Cadillac” Catlett to negotiate. Cadillac was a “reformed member” and had long since begun cooperating with the authorities. He was murdered by the Stones. The warden later came out to speak to the rioters and delivered a speech to the organizing inmates while standing in a pool of Cadillac’s blood. The situation was resolved shortly afterward.

In the 1990s, the population of Joliet was around 1,300. Conditions were unsafe and unsanitary, given the standards expected of a modern-day prison. In 2002, Illinois Governor George Ryan closed the prison for what he said were budgetary measures.

In the years after its closure, vandals brought graffiti and occasional fires to the old prison. After a decade and a half of neglect, the City of Joliet took control of the property. They enlisted the help of the Joliet Area Historical Museum to turn the old prison into a public works project. This culminated in a 6,000 hour, million-dollar restoration project that turned the old prison into a museum. The Old Joliet Prison opened for tours in 2018.

Executions were conducted onsite, and sometimes they were gory. Hundreds were killed by electrocution or lethal injection on the grounds of Joliet Prison, and countless other inmates were murdered by inmates or simply died of disease or old age. Needless to say, many who enter the prison have felt some supernatural phenomena. The gothic architecture, aging infrastructure, and the simple knowledge that death lurks at every turn are enough to keep most tourists on their toes.

The Joliet Prison has made its way to the Big Screen due to its notoriety and its supposed hauntiness. The prison has made appearances in films like White Heat, Blues Brothers, and Let’s Go to Prison. It’s also been on several TV shows, including a sketch on Saturday Night Live, Prison Break, and Bones. The prison was also featured as a haunted location on Ghost Adventures in an episode centered on serial killer John Wayne Gacy.

Chicago is a fun place to be, but the Windy City can also be a terrifying place. How so? Why not ask Hermann Butcher of Palos Park? When beef supplies ran low during a nationwide depression, he looked to the traveling hobos to offer a new supply of meat. After butchering countless nomads to death, the town locals had grown a liking for his cuts, despite not knowing where they came from. Eventually, he was found out, and the Chicago mafia didn’t take too kindly to a man selling human meat to unknowing families. The Excalibur Nightclub was one of Chicago’s top party spots, but despite being a lively place, it also attracted the dead. Ghosts were known to frequent the spot, and they had a blast knocking drinks over and lighting candles at random. Fort Dearborn is one of the oldest structures in Chicago and probably one of the most haunted. After a massacre during the War of 1812, the bodies buried underneath the fort are still turning in their graves. Want to see more Chi-town haunts? Check out the top ten most haunted spots in Chicago right here!