HOME » BLOG » HAUNTED STORIES » THE STORY OF H.H.HOLMES – PART 1 “THE DEVIL IN ME.”
Posted by blogger in Windy City Ghosts 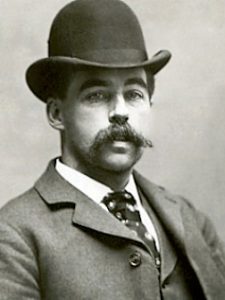 Why a two-parter? We rarely if ever do a two-parter? Why does a fella’ like H.H.Holmes deserve such a lofty and prominent investigation? Well, I’m just going to come out and say it, because he’s a Batman villain. And by that, I don’t mean the newfound, radicalized down to Earth, Chris Nolan, version, but the campy old Adam West disco boogie Batman type… with a twinge of American Horror Story. I mean this fella’ was all over the place. He might as well have an oiled mustachio to curl. H.H.Holmes was the Joker, the Penguin, and the Riddler all mashed up into a ball of serial killer insanity. The man elaborated death traps and bizarre merry-go-rounds of death that would have had the King Tut knave slapping his face and going, “too much.” To put it into context and two up this long-winded analogy, you know when the Joker trapped Batman and Robin, and instead of shooting them in the forehead, he’d go and kicked them into an outlandish funhouse of mutilation? Saws coming out of the wall, clowns with flamethrowers popping out of the floor, acid rigged springier system. A contraption that would have cost him twice as much as what the Joker was going to blunder or steal? Well, that’s H.H.Holmes in a nutshell. Whacked and with too much time and an architect’s cerebellum to play with… Oh, and he was a full-blown serial killer.

So, yeah, a two-parter… If you don’t like it, go someplace else. See if I care.

“I was born with the devil in me. I could not help the fact that I was a murderer, no more than the poet can help the inspiration to sing—I was born with the “Evil One” standing as my sponsor beside the bed where I was ushered into the world, and he has been with me since.”

In case you want to skip most of the fine points, here’s a quick rundown of Holmes and why he’s such a famous serial killer. Quick, dirty, and to the point.

Herman Webster Mudgett (May 16, 1861 – May 7, 1896), better known as Dr. Henry Howard Holmes or H. H. Holmes, was an American serial killer. Holmes confessed to 27 murders, only nine could be reasonably verified and several of the people he claimed to have slain were still alive at the time of his admission. Multiple victims were annihilated in a mixed-use hotel which he owned, located about 3 miles west of the 1893 World’s Fair. There’s a great book called The Devil In The White City by Erik Larson that’s a thrilling narrative of not only the Fair but everything Holmes related.  A narrative that if the Hollywood rags are to be believed will soon be adapted by Leonardo DiCaprio and whichever director is lucky enough to work elbow to elbow with that legend.

Holmes used the fair to attract victims to his  World’s Fair Hotel (informally called “The Murder Castle”), though data hints the hotel part was never truly open for clientele.

Asides from being a serial killer, he was also a conman and a bigamist, no to mention the protagonist of about 50 lawsuits, give or take, in Chicago alone. Holmes was hung on May 7, 1896, nine days before his 35th birthday. He was executed primarily on the charge of murdering his friend and associate Benjamin Pitezel. It was a thrilling trial and one of the first ones covered by the national press. It was a pig-circus and Holmes, an egocentric, loved the attention. He loved the press and loved the way they painted him as the devil. Throughout his trial for the killing of Pitezel, Holmes admitted to a slew of other killings.

Holmes was shot out of his mama and into this world to cause havoc as Herman Webster Mudgett in Gilmanton, New Hampshire, United States. the date the devil decided to vex humanity once more?  May 16, 1861.

His parents were Levi Horton Mudgett and Theodate Page Price, the two were descended from the first English emigrants in the area.

H. H. Holmes was his parents’ third-born child; he had an older sister Ellen, an older brother Arthur, a younger brother Henry and a younger sister Mary. Holmes’ daddy came from a farming family, and oftentimes he toiled as a trader, framer, and house painter. Both his parents were pious Methodists.

Later reconstructions by those crafty Mindhunters from the FBI to fit Holmes into the models seen in recent serial killers have uncovered signs that he tortured animals and suffered from abuse at the hands of a violent pop. Still, does reconstructions might well be flights of fancy, since no eyewitness reports of his childhood do not provide evidence of either.

Holmes, at the age of 16, graduated from Phillips Exeter Academy and found a teaching post in Gilmanton and later in nearby Alton. On July 4, 1878, he wedded Clara Lovering in Alton; their son, Robert Lovering Mudgett, was born on February 3, 1880. Robert later became a certified public accountant and worked as the city manager of Orlando, Florida.

H. H. Holmes enlisted in the University of Vermont in Burlington, Vermont, at age 18, but was unhappy with the school and left after one year. In 1882, he enrolled at the University of Michigan’s Department of Medicine and Surgery and graduated with honors in June 1884.

While studying in the Department of Medicine, he served in the anatomy lab under Professor Herdman, the chief anatomy instructor.

“Holmes was fascinated, passionate, and even infatuated with the inner workings of the human body.”

Holmes also, following his passion, apprenticed in New Hampshire under Dr. Nahum Wight, a legendary advocate of human dissection. Years later, when Holmes was suspected of all the deaths his fowl hand had performed and declared just an insurance scammer, he confessed to using corpses to cheat life insurance companies numerous times in college.

Holmes’ fellow housemates described how treating Clara violently. Beatings, rappings, and near-fatal fights. In 1884, Clara moved back to New Hampshire and cut off all ties with the man. She later wrote she knew little of him afterward.

After he moved to Mooers Forks, New York, a tale proclaimed that Holmes had been observed with a small boy who later vanished. Holmes insisted the lad went back to his house in Massachusetts. No inquiry took place and Holmes immediately left town. The boy was never found.

Holmes later moved to Philadelphia, Pennsylvania, and accepted a job as a watchman at Norristown State Hospital. He quit after just a few days.

He later took a job at a drugstore in Philadelphia. While in Philadelphia, a boy died – poisoned with the wrong medicine – in the city. The purchase was traced to the store. Holmes denied any foul play and simply chucked the ordeal to an accident. He once more immediately left the city. Right before moving to Chicago, he altered his name to Henry Howard Holmes to circumvent the likelihood of being detected by victims of his earlier scams and crimes.

In his statement after his incarceration, H. H. Holmes declared he had killed his former medical school friend, Dr. Robert Leacock, in 1886.

In 1886, while still married to Clara, H. H. Holmes wedded Myrta Belknap in Minneapolis, Minnesota. He filed for an annulment from Clara a few weeks after marrying Myrta; claiming cuckoldry on her part. The allegations could not be verified and the suit was tossed out of court.

On January 17, 1894, while in Denver Colorado, Holmes went and married Georgiana Yoke. It was a fast fling. Holmes was a sociopath who embodied the perpetual bad boys… He had a way with ladies. There was something about him that simply made him irresistible. Something, a hidden charm, he would exploit often and quite thoroughly for his own nefarious ends.

So, so far, H.H.Holmes has been prancing around the US, getting hitched left and right, scamming whoever he happened to stumble on, and basically becoming a general pest to local authorities, right? That, and he’s also been sharpening his mind, learning all he can about medicine and human biology, and making small kids vanish into thin air.

This can’t end well… right?… Find out in the second part of this thrilling tale.