The Story Of H.H.Holmes – Part 2 “gruesome and taking a Satanical Cast” 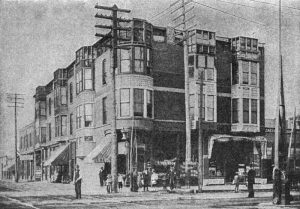 If you just arrived at this article, willy dilly, without a care in the world, then I’m sorry to inform you that you have a bit of catching up to do. You have to study. This is, in case the title didn’t clue you in, part 2 of, wait for it, a two-part investigation on the life, crimes, and horrors of H.H. Holmes.

Nonetheless, in the spirit of those snappy previously from TV shows, here’s a recap. Imagine a ticking clock in the vein of 24.

“Herman Webster Mudgett (May 16, 1861 – May 7, 1896), better known as Dr. Henry Howard Holmes or H. H. Holmes, was an American serial killer. Holmes confessed to 27 murders, only nine could be reasonably verified and several of the people he claimed to have slain were still alive at the time of his admission. Multiple victims were annihilated in a mixed-use hotel which he owned, located about 3 miles west of the 1893 World’s Fair. There’s a great book called The Devil In The White City by Erik Larson that’s a thrilling narrative of not only the Fair but everything Holmes related.

Asides from being a serial killer, he was also a conman and a bigamist, no to mention the head of about 50 lawsuits, give or take, in Chicago alone. Holmes was hung on May 7, 1896, nine days before his 35th birthday. He was executed primarily on the charge of murdering his friend and associate Benjamin Pitezel. Throughout his trial for the killing of Pitezel, Holmes admitted to a slew of other killings.”

When we last left Holmes, he had just moved to Chicago, had wed 3 different ladies – none knew the existence of the other, had graduated from medical school with a masters in anatomy and dissection, and had been running away from the law – the man being sought out in cases involving missing kids.

My Kind Of Town Chicago is!

Holmes hit in Chicago in August 1886. This is also when he began using the name “H. H. Holmes.” He quickly began working at a drugstore and in less than a year or so, Holmes ended up buying the store. He was described as a hardworking employee.

Holmes then bought an empty lot opposite from the drugstore, where he began construction on a two-story mixed-use building, with apartments on the second floor and retail spaces on the first; this is teh place that could eventually be known as Holmes’ Murder Castle. One of his first scams, that acquired him a lawsuit? He refused to pay teh architects.

In 1892, he added the third floor, narrating to investors and suppliers he planned to use it as a hotel during the upcoming World’s Columbian Exposition. By now, the building was full of hidden rooms and passages. A maze that Holmes crafted on his very own.

By 1892, the hotel was moderately built; three stories and a basement. The first floor was the storefront. The second story consisted of a complex torture room. The third floor held apartment rooms.

One of Holmes’ first murder victims was his mistress, Julia Smythe. When the husband found out about the affair, he quit his job and moved away, leaving Julia – who continued her relationship with Holmes – and his little daughter Pearl behind.

Julia and Pearl faded into the history books on Christmas Eve of 1891.

5 months later, Holmes had himself another paramour, Emeline Cigrande. The woman disappeared in December 1882.

By 1893, Holmes had once more charmed another lady, a one-time actress named Minnie Williams. By the end of the year, not only Minnie by Minnie’s sister, Annie, had disappeared.

Holmes met and became intimate friends with Benjamin Pitezel, a carpenter with a criminal past. Holmes employed Pitezel as his right-hand man for various criminal plans.

Holmes and Pitezel both had entrepreneurial spirits. One of the men’s go-to scheme was to sell skeletons to medical labs and schools.

“He, and sometimes a hired assistant, were accused of stripping the flesh off the bodies, dissecting them, and preparing the viable skeletons. The rest of the remains would be tossed in pits of lime or acid, effectively breaking down the remaining evidence.”

Insurance companies were hounding Holmes and eager to prosecute him for arson and other nefarious actions. Holmes, feeling the heat, left Chicago in July 1894. He appeared in Fort Worth, where he had inherited property from the Williams sisters. There, Holmes wanted to build another “castle” similar to the one he had in Chicago; once more, he began to swindle a number of suppliers.

In July 1894, Holmes was arrested and temporarily incarcerated for the first time, on the charge of selling mortgaged goods in St. Louis, Missouri. During hsi time in jail, Holmes concocted a harebrained scheme to cheat an insurance company out of $10,000 – about $296,000 in 2019. The plan hinged on Holmes faking his death.

The insurance companies were already weary of Holmes, so when the man tried his scheme and investigation arose… Holmes cut his losses and decided to once more leave town.

By now, the man was getting a reputation… a nationwide reputation.

Holmes, still itching for that 10K insurance company roped his trusty friend Pitezel and tried his scheme once more. The difference? The person faking hsi death would be Pitezel. The plot? Set Pitezel up as a crockpot inventor named B.F. Perry… a man that would be killed and disfigured in a horrendous lab explosion. Holmes would find a body to supplant Pitezel and Bob’s your uncle! You guessed it! Holmes decided to cut Pitezel out of his scheme and keep the dough and payout all to himself.

Holmes murdered Pitezel by knocking him unconscious with chloroform and setting his body on fire with the use of benzene. Holmes then collected the insurance payout on the grounds of the genuine Pitezel corpse.

Holmes, the rat bastard he was, turned up his charms on Pitezel’s; the woman unaware of what had happened to her husband. Holmes manipulated the dame into allowing three of her five children to be in his custody. Why? Ransom for the future… How else was he going to get the insurance money?

Holmes and the three Pitezel children traveled throughout the northern United States and into Canada. Concurrently, he accompanied Mrs. Pitezel on a parallel route, all the while lying to her: “Your husband is in London waiting for you.”

Holmes, killed two of the three kids he was with right away. He drilled a hole in the lid of a car trunk and put one end of a hose into it, connecting the other end to a gas line. he asphyxiated both girls and buried their nude bodies in the cellar of his rental house.

Meanwhile, in Philadephia, Frank Geyer, a police detective, assigned to investigate Holmes, is hot on Holmes’ tail. The man task with finding the kids. Geyer uncovers the rotted bodies of the two Pitezel girls. in the cellar of the Toronto home.

“The deeper we dug, the more horrible the odor became, and when we reached the depth of three feet, we discovered what appeared to be the bone of the forearm of a human being.”

Frank, now on what he viewed as a mission from God, goes to Indianapolis… a tip telling him that Holmes rented a cottage there. What he finds freezes his blood in his veins. Sharpened bones and bits of bone and teeth in the chimney. Holmes had chopped the final Pitezel in his care, a boy named Howard, and tossed his body into the fireplace.

Holmes’ murder spree ultimately ceased when he was arrested in Boston on November 17, 1894, after being dogged there from Philadelphia by the Pinkertons. By now, thanks to Frank, Holmes was on everyone’s wanted list.

In October 1895, Holmes was put on trial for the murder of Benjamin Pitezel. The DA wanted a fast case… and a rapid execution; the media was a circus and the tales concerning hie murder Castle were far too sensational.

Holmes was found guilty and sentenced to death.

Following his sentence, Holmes admitted to 27 murders in Chicago, Indianapolis, and Toronto, and six attempted murders.

Holmes was paid $7,500 (worth $230,000 today) by the Hearst newspapers in exchange for hsi tell-all confession. Some of his tales and ghastly tellings were found to be mostly nonsense.

Before he was hung, Holmes drastically changed his facial appearance He explained his new, grim look as “gruesome and taking a Satanical Cast.” The man was convinced that he was starting to resemble the Devil.

On May 7, 1896, Holmes was hanged at Moyamensing Prison. His neck didn’t snap, the executioner – on behalf of the warden – making great pain to prolonge the madman’s suffering. Holmes twitched and suffocated for over 15 minutes.

Up until it was set on fire by two men in August 1895, the place was said to be haunted. The Castle went up in flames and with it most of its ghosts. What little remained was made was gutted by a second fire in 1939. The site is now occupied by the Englewood branch of the United States Postal Service.