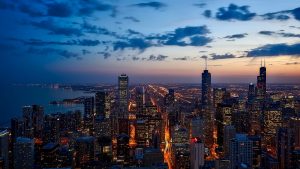 The Windy City and Her Ghosts!

Chicago is known for its strange inhabitants and occurrences, and with an almost 200-year history, it’s no wonder the Windy City houses some of the world’s most haunted locales. Founded in 1837, Chicago was built on the mouth of the Chicago River, which back in those times was clean and safe to drink. The city boomed due to its natural water feature and remains the largest city in the Midwest since the 1880 census. So, what makes Chicago so alluring to ghosts? Read on to discover the top 10 haunted locations in Chicago city and its surrounding areas!

A beautiful, relaxing space, Chicago’s Lincoln Park is a local favorite for picnic outings or cookouts with the family. But what if we told you the park’s sprawling lawns and playing fields may conceal as many as 10,000 unmarked graves?

One paranormal investigator claims it to be the most active site they’ve ever investigated. Both visual and auditory activity have been recorded here, and manifestations of ‘heavy’ atmospheres and physical effects like nausea and light-headedness. The paranormal activity here is thought to be caused by the park’s former function as the city’s main cemetery. When the Great Fire of 1871 struck the city, many of the wooden grave markers were destroyed, making it nearly impossible to find the relocate all the bodies buried here. Park-goers of today report feeling sick, tired, and leave the park with pounding headaches. Perhaps the dead here just want some peace and quiet?

Rebuilt in 2014, The Red Lion Pub was brand new, with no spirits in tow, right? Unfortunately, it did not take long for the original pub’s ghosts to return. One of the most well-known is a spirit by the name of Sharon, who allegedly died of measles in 1959 when the pub’s site itself was residential. According to the staff of the Red Lion, Sharon is a mischievous spirit, knocking over books, interfering with sound systems, and opening windows on cold days. Visitors also report feeling a presence in the pub, one they describe as being pushy with a lot to say.

An iconic structure in Chicago, the Water Tower has a very popular history since it was one of the few buildings that survived the Great Chicago Fire. Built in 1869, the tower stood strong through the flames, and bore witness to one of the most devastating disasters the city had ever seen, claiming the lives of over 300 Chicagoans. The story goes that one of the water tower’s workers stayed behind, to man the water pumps in an attempt to dampen the street and quell the flames. As the fire engulfed the tower, and with no escape in sight, the worker retreated to the top floor of the tower and proceeded to hang himself rather than burn alive. Tourists to the tower today report seeing a man hanging through the tower’s top floor windows. Police have even been called, to arrive and see the same apparition, but upon investigation inside, they find nothing. The tower itself is made from Limestone, which in the paranormal community is known to hold tightly onto energy, and can create residual hauntings, which are like videotapes of the past, replaying day after day.

This tavern turned punk-rock club is steeped in blood. The site of at least two grisly murders, one involving an ax – the other involving a soda bottle – the site is often included on ghost tours of the city. In 1986, Frank Hansen, the former owner of the tavern was charged with the ax murder of his wife at the site. He then hid the body in their shared apartment for six days before police were called. As for the soda bottle incident, it involved a 70-year-old man named John Parlea. He was beaten with the bottle and then shoved from the second story window, accused of stealing clothing from an unemployed man named Samuel Castell Jr, who was later charged with the murder. Even recently, a man narrowly survived his throat being slit in a bar fight at the club. Liar’s Club was also featured on Discovery Channels ‘Ghost Lab’ in 2009, where the team felt negative emotions and energy lingering in the space.

One of Chicago’s worst and most famous tragedies, the S.S. Eastland Steamship disaster is truly one of the most horrifying. On July 15th, 1915, in the heat of the city summer, the S.S. Eastland was traveling the Chicago River on its way to Michigan City when it capsized, trapping 2,572 passengers inside the boat. Water rushed in, quickly claiming the lives of 844 people. The boat’s heavy furniture crushed and trapped some, leaving them to drown. The influx of bodies was too much for Chicago’s hospitals and morgues, so nearby establishments and businesses were used as temporary morgues for the dead. These included Castle Nightclub and Oprah’s Harpo Studios.

One paranormal researcher states that “The trauma suffered by those who died at the site left an impression behind, stored up energy…” Even today, visitors with no knowledge of the tragedy report feeling panic and compelled to jump into the water to rescue unseen victims. A team of investigators visited Harpo Studios and placed a recording device against one of the building’s walls. Voices were recorded that seemed to be talking about the Eastland Disaster. One woman’s voice was heard saying “Died on the water ship…” another said, “It’s going down…”

Many sightings of apparitions and strange wave patterns have also been reported at the spot where the S.S. Eastland flipped over.

This Englewood ‘torture palace’ was the ‘hotel’ of notorious Chicago serial killer H.H. Holmes, who preyed upon women who were visiting the 1893 Columbian Exposition. The building itself was demolished in 1930, but the horrors that took place here are said to infect the site, to this day, which makes this the perfect halfway point on our top 10 most haunted locations in Chicago list. Now an empty lot, the area remains charged with negative energy. According to some claims, Holmes killed 200 people inside the building, which was outfitted with gas chambers, trap doors, and a crematorium in the basement.

The castle’s actual history may not be so horrifying, however. Only nine murders were confirmed here, with Holmes confessing to 27 in total. There’s no evidence that he trapped strangers in the building, or tortured them for that matter. The nine people he likely killed were people that he knew.

So why did newspapers spread such wild rumors about H.H. Holmes? He was a known and convicted swindler, for one, but during the 1890s, a practice called ‘yellow journalism’ was running rampant. Yellow journalism is when a story is outfitted with sensational details and exaggerations.

What really happened in this building? Only those that died here know for sure, but a visit to the empty lot has most people shaking by the time they leave.

Established somewhere around 1860, the Graceland Cemetery is the final resting place for numerous famous Chicagoans, including designer Daniel H. Burnham, film critic Roger Ebert, and businessman Marshall Field to name a few. But a grave with the name ‘Inez Clarke’ that sits deep in the cemetery is the main reason this location made our list. According to many accounts made by cemetery visitors and security guards, a statue of a girl clutching a small parasol enclosed in glass that sits on top of the stone will randomly disappear, reappearing, later on, to do the same thing again. Is this tombstone a portal to another realm? Or does the spirit of Ms. Clarke haunt the grave? It is said that Inez lived in Chicago in the late 1800s. She was born in 1873 and died in 1880, aged only a mere 6 years. Legends of little Inez are plenty. One states that she was killed by a lightning strike and that her statue disappears during thunderstorms because she was so afraid of them in life. Inez’s spirit is seen wandering the cemetery by other children. Conflicting information of cemetery records makes it almost impossible to know who is buried underneath the statue. One report says Inez Clarke, another says Inez Briggs, and a man named Amos Briggs was also said to be buried there. Perhaps visiting the grave for yourself and seeing who you meet there will answer any questions!

Everyone has heard a ‘vanishing hitchhiker’ story before, but this cemetery is home to the original. After a wonderful night of dancing and grandeur at the O’Henry Ballroom, a woman was fatally struck by a car on Archer Avenue in the 1930s. She was laid to rest at Resurrection Cemetery, but her spirit does everything but truly rest. Since that day, legends have arisen of a woman dubbed ‘Resurrection Mary’ in 1930s dress attempting to hitch rides along Archer Ave, only to disappear as the car approaches the cemetery. Several eyewitness reports consist of men picking up the young woman, and letting her out when she asks, which is always right in front of the cemetery gates. One report even tells of a tale of a passerby seeing a woman behind the cemetery gates, clutching them as if she were trapped inside. Upon later investigation, handprints were burned into the iron bars, which were later removed.

Constructed in 1893, this hotel was built to house the extreme traffic of The World’s Columbian Exposition, also known as The World’s Fair. The hotel plays host to a dark and mysterious past. Rumors have spread that Al Capone and members of the mafia owned this hotel, and committed some inhumane atrocities inside its walls. Besides its plethora of mob-related rumors, the South Tower of the hotel houses a spirit dubbed ‘Peg Leg Johnny,’ who was a drifter that was brutally murdered at the hotel. In the North Tower, nighttime security guards have reported seeing young children playing in the hallways. One young boy, in particular, is believed to be the spirit of a boy who was thrown from the North Tower’s roof by his mother, who committed suicide shortly after. If two haunted towers weren’t enough to place this hotel on our list, a haunted room would surely do the trick. Room 441 is one of the eeriest locations in the hotel. No one is sure why, but visitors have reported seeing the outline of a woman in the room with them, as well as objects moving on their own, and lights turning on and off. To this day, most security calls come from visitors in 441.

Known in the early 1900s as the Iroquois Theater, the so-called ‘absolutely fireproof’ theater encountered a terrifyingly devastating fire on December 30th, 1903. As flames engulfed the building, the fire doors somehow got stuck, trapping 2,000 people inside with the fire. When it was finally quelled, 602 people were pronounced dead at the scene, 212 of them children. It took firefighters and paramedics 5 hours to retrieve all the charred bodies, using the alleyway by the theater as a temporary morgue where families would then come to identify their loved ones. The ghosts of this fateful fire stay put to this day, faintly crying, touching, and pushing theatergoers of today.

There you have it! Our top 10 haunted locations in Chicago. Did your favorite paranormal location make the list?